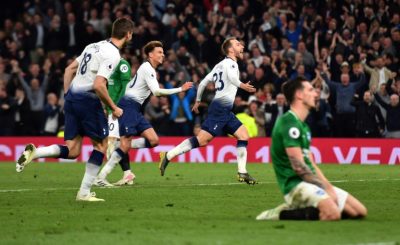 Mauricio Pochettino’s third-placed side dominated from start to finish at the Tottenham Hotspur Stadium, but a combination of brave Brighton defending and poor finishing kept the match in the balance until the 88th minute.

Although Arsenal can close the gap to one point if they win at Wolves on Wednesday, and this was a vital result in Spurs’ bid to qualify for next season’s Champions League via a top four finish.

Tottenham have now won all four games in all competitions at their plush new arena, scoring eight goals without reply.

This was the most frustrating fixture at the £1 billion ground as the hosts looked hamstrung without injured striker Harry Kane until Eriksen came to the rescue with his ninth goal of the season in all competitions.

But Pochettino will be delighted with the way his players kept plugging away right to the end despite the draining effects of their hectic fixture list.

Tottenham can take another step towards securing their top-four berth in Saturday’s crucial London derby against West Ham before focusing on the first leg of the Champions League semi-finals against Ajax next week.

The finale was painful for Brighton, who have won only two of their last 15 league games and sit just one place and three points above the relegation zone.

They have failed to score in their past seven games in all competitions and are in severe danger of being caught by third bottom Cardiff in the fight to avoid relegation.

Defeats for Arsenal and Manchester United, combined with Chelsea’s draw against Burnley, had given Tottenham a welcome lift following their 1-0 loss at Manchester City on Saturday.