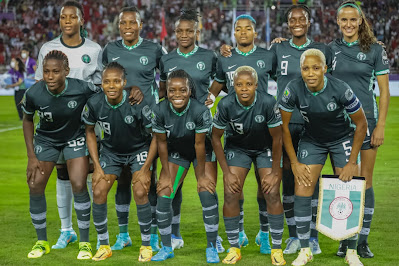 Nigeria’s Super Falcons have been drawn in the same group alongside host nation Australia and two-time CONCACAF champions for next year’s FIFA Women’s World Cup.

The draws were made at Auckland’s Aotea Centre in New Zealand where the 32 participating nations were divided into eight groups (A-H) of four teams.

Nigeria is drawn in Group B dubbed “tough” alongside three-time quarterfinalist and host nation Australia, debutants Republic or Ireland and one-time semifinalist Canada.

Super Falcons, who have participated in every edition of the FIFA Women’s World Cup since its inception in 1991, will host the Canadians in their opening game of the group.

South Africa will lead the continent to the global stage as the reigning champions of Africa, having won the Women’s Africa Cup of Nations for the first time in their history in July.

Another African representative at the tournament, Zambia, will face Spain, Costa Rica and 2011 winners of the competition Japan in Group C.

The 2023 FIFA Women’s World Cup will take place in 10 different venues across nine different cities in Australia and New Zealand from  20 July – 20 August.