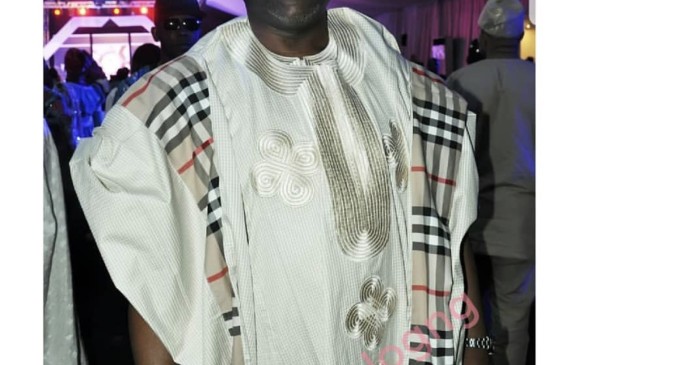 Humor, a good sense of it, is to First Bank of Nigeria (FBN) what manhood is to a midget and the bank goes to great lengths to prove it. Little wonder the bank’s media team hit the social media with ridiculous posts about Managing Director (MD), Adesola (“Sola”) Kazeem Adeduntan’s fake Burberry agbada, a Yoruba cultural apparel – The Capital NG reported.

While the motive of the bank’s staff was probably to project their MD as hip, they succeeded in showing him up as a clown, which places him on far higher plane than a failed actor.

The bank’s staff did not stop at posting ridiculous notes about their MD, they went on to compare his outfit to former Big Brother Nigeria (BBN) housemate, Ebuka Obi-Uchendu’s clean cut agbada, which he wore to musician, Banky W’s wedding. 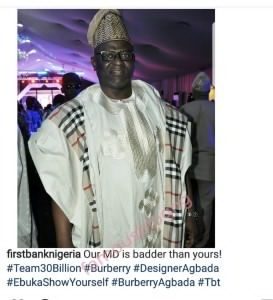 Predictably, the post portrays Adeduntan in unfavourable light. Among other things, it makes nonsense of his reputation by celebrating his unforgivably fake designer apparel and it also belittles him by equating him with a random celebrity.

Prior to his ridiculous portrayal on social media, Dr. Adesola (“Sola”) Kazeem Adeduntan (FCA) flaunted an impressive record as the Managing Director/Chief Executive Officer of First Bank of Nigeria Limited. Until his ascension to the office of MD, he served as the bank’s Executive Director and Chief Financial Officer.

Before joining First Bank, Adeduntan was a Director and the pioneer Chief Financial Officer/Business Manager of Africa Finance Corporation. He has served as a Senior Vice-President & Chief Financial Officer at Citibank Nigeria Limited, a Senior Manager in the Financial Services Group of KPMG Professional Services and a Manager at Arthur Andersen Nigeria.Sola also had a brief stint at the defunct Afribank Nigeria Plc (now Mainstreet Bank) as a graduate trainee where he worked mainly in banking operations.

Sola attended the University of Ibadan, where he obtained a Doctor of Veterinary Medicine (DVM) degree. He also holds a Master’s Degree in Business Administration (MBA) from Cranfield University Business School, United Kingdom which he attended as a distinguished “British Chevening Scholar.”

In addition to his MBA, he has attended executive/leadership programmes at Harvard, Cambridge, Oxford and INSEAD.
Adeduntan is also a member of Sigma Educational Foundation, which is focused on enhancing the quality of tertiary education system in Nigeria and a member of the prestigious Metropolitan Club. He is happily married with children.