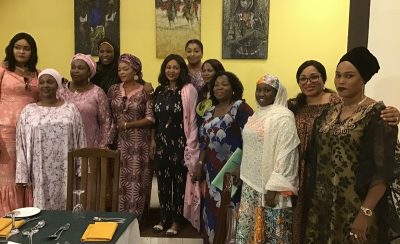 The All Progressives Congress (APC) Women Aspirants Forum has demanded key appointments as President Muhammadu Buhari plans to form new cabinet after May 29.

Leader of the group, Mrs Adedoyin Eshanumi, told newsmen in Abuja on Wednesday that the demand became necessary after the men took more than 90 per cent of political positions in the party.

Eshanumi, a Senatorial aspirant in Kogi State, said the only way to compensate the women was for President Buhari to give them political appointments for their efforts which ensured the party’s victory in the 2019 presidential election.

Mrs Ann Agom-Eze, Co-Convener, said that the meeting was also convened to evaluate the outcome of the just concluded 2019 general election and the position of women in the present administration.

Agom-Eze, also a Senatorial aspirant for Ebonyi South, said time had come for women to take what belonged to them.

“We have to convene this meeting because we are the APC female aspirants who were lobbied out of the primaries; the men made up their minds that they will not give us a space in the governance of this country.

“I am someone who stands up for the women; so, I believe that women should be part of the appointments to be made soon by Mr President.

“We should be recognised and empowered to enable the APC women to stand firm come 2023.

“Since election is over, we should be given appointments and we don’t want a situation where people will tell us to go to women commission.

“We can be Ministers; we want to head organisations because it will position women for 2023.

“We no longer want to rely on men because power is not given, you have to take it,” she said.

According to Agom-Eze, the 9th National Assembly (NASS) should enact laws that will protect female politicians from the “bullying” nature of their male counterparts.

She added: “NASS should be able to come out with a law for representation on quota basis; for example, if we have three senators from a state, one should be a woman.

“It is not fair that in a whole NASS we have just few women; our representation is depreciating day-by-day and that is not good for the country, and that is why we are here.

Enugu State Deputy Governorship aspirant, Mrs Ginika Tor-Williams, also urged all APC female aspirants to forget the grievances and come together and start early to plan for the 2023 election.

Tor-Williams said: “The best thing is to begin to bring everybody together and let us forget our grievances; I believe there must be a solution for equitable representation of women in this government.

“However, it doesn’t augur well when you foist leaders on people rather than allowing them to choose who they want, and I tell you that it is a big problem in Nigeria; but I hope we have learnt our lessons.

“I believe we will build a formidable team in 2023 because our major problem in Enugu was factionalisation and at some point our followers became tired and frustrated.