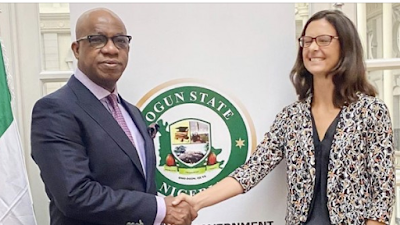 As far as investment promotion drive is concerned, Governor Dapo Abiodun has moved from robust rhapsodizing to enacting sound policies that would make the state live up to its appellation as Nigeria’s industrial hub. Even when he was yet to become Ogun State Governor, Prince Dapo Abiodun knew that making the state attractive to investors would not only engender economic prosperity but also make peace pervasive and governance seamless.

While mounting one podium after the other canvassing for votes as a gubernatorial candidate, he minced no words about his enthusiasm and plans to give a fillip to investment in the Gateway State. For him, it is not enough to just mouth the “Nigeria’s industrial hub” appellation for which Ogun State is known; living up to that label is a task that must be done. It, therefore, is satisfying that he has been building institutional structures and policies for a viable state.

Yes, on  Abiodun’s watch, Ogun State will morph from a plain sense of things to tabernacle of feats and precious attainments. And this is realisable by his relentless bid to turn the fortunes of the state around. To actualise his goals, the governor is exploring every avenue to attract growth and progress for the State.

To underscore his seriousness, the Ogun State Governor  last week met with executives of at least nine UK-based companies in a bid to pull investments into the State. The meeting took place at The Landmark Hotel, London.

Abiodun, who attended the UK-Africa Investment Summit 2020 in London with President Buhari, had promised to represent the interests of the people of the state both at the summit and on the sidelines.

The summit, facilitated by the UK Department of International Trade under the Investment Promotion Programme, is a platform that avails participating countries the opportunity to establish a new phase of partnerships on investments and mutually beneficial economic prosperity.

According to him, the strategic “Geographical location of our dear state, coupled with a population of about five million, largely arable landmass covering 17,000 KM2 and tight proximity to Nigeria’s economic capital, stands Ogun State in good stead for very high returns on investment and makes room for ease of expansion across the State as well as other neighbouring states.

“The resourcefulness of our people is another advantage investors stand to gain from. Largely, we are a population of highly sophisticated, educated and youthful men and women. We have been implementing initiatives and embracing ideas that see to quality education and capacity building for our people.

He stressed that the state is a great destination for Foreign Direct Investment (FDI) not only for its advantage as a transport-cum-logistics hub, but also because of reforms in ease of doing business, and respect for the sanctity of contracts by government agencies, among others.

“We have also given a fillip to our ‘Ease of Doing Business’ drive by building institutional frameworks that disentangle investors from bureaucratic bottlenecks of all sort. We have come up with several reforms to drive speedy economic growth in the State.

“The Ogun State Investment Promotion Agency was set up to provide a one stop shop and eliminate unnecessary delays in processing necessary documents, while the public private office has also been established to ensure that the state has a template transparent and accessible. To say that we are ready for business is an understatement,” Abiodun explained.

The governor was together with his team, received by the Managing Director of Alvan Blanch, Mr. Andrew Blanch. Governor Abiodun was in company with the commissioners of finance and of Commerce, Mr. Dapo Okubadejo, and Mrs. Kikelomo Longe; the Senior Special Assistant to the Governor on Commerce, Mrs Sola Arobieke; and Special Assistant at the Governor’s Office, Debo Adeleke.

On Wednesday, Abiodun was in five other companies to meet with their executives. The different companies have multiple specialisations in energy, infrastructure, agriculture and agro-processing, investment and asset management. Others include technology, financial advisory, capital raising, private equity.

At United Green, the governor was received by Rod Bassett, Director, Agriculture and Dairy and Amin Ajami, Director, Principal Investment. United Green is a multi-interest investment company in markets including agriculture and nutrition, real estate and technology. The meeting was an opportunity for both parties to discuss the possibility of siting a state-of-the-art commercial dairy farm in Ogun State.

Received by the Chief Investment Officer, Chris Isaac, and the CEO, Daniel Hulls, Abiodun was also at AgDevCo. AgDevCo is a co-funded company that invests in the transformation of agribusiness in Africa, ensuring food security by providing growth capital and support to high-potential partners. Seeing as Ogun State is a high-potential investee because of its ease of doing business status, location and arable land, Abiodun outlined the benefits of investing in the agribusiness of the state, which is currently being locally developed back home.

Also The thing in Dapo Abiodun’s blood… by Lanre Alfred

Lion Head’s Global Partner, Christopher Egerton, and its Directors, Olamide Edun and Fola Pedro received Governor Abiodun in a meeting with the investment bank which operates globally across high-potential markets in financial advisory, capital raising and other investment management activities.

The governor also met with Actis’ Senior Adviser, Simon Harford and Edu Okeke of Azura Power West Africa Ltd. Both companies are world-class power investments companies that have a long history of advisory and investment roles in Africa, especially Nigeria. The companies expressed their will to explore the numerous potentials of Ogun State, considering amongst other things the State’s proximity to Lagos, the nation’s commercial capital.

After having signed a memorandum of understanding (MoU) with Adam Smith International in November of last year, Ogun State is set to see a new phase in urbanisation and public transportation, which would ensure job creation and reduction in poverty. Mr. Guy Harrison, Head of the Foreign and Commonwealth Office’s Prosperity Fund in Nigeria, had signed the MoU together with the Secretary to the State Government, Mr. Tokunbo Talabi, towards ensuring that people can live and work in Ogun State peacefully.

In furthering this, Abiodun had a tour of one of the smart cities of the Future Cities Nigeria programme in London. At the meeting were Matt Uzell of Adam Smith International, Bob Allies of Allies and Morrison, and other investors and consultants.

The governor also met with a delegation from the Sumitomo Mitsui Banking Corporation (SMBC), led by Nisrin Abouelezz, Regional Group Head, Africa (International & Structured Finance). SMBC is a reputable Japanese bank with over 400 local branches and 19 overseas branches, excluding sub-branches and agencies. The bank, with a balance sheet of $1.6trillion, is looking to fund projects in Ogun State because of the prospects that are laid bare to it.

The Mabey Group, a UK group of companies which specialise in steel, plant hire, engineering and construction products, is also looking to invest in the infrastructure of the state. The team from the group, led by Michael Treacy, President and Founder, Treacy & Company met with Governor Abiodun in London to discuss and fine-tune details of the partnership that would bring to reality the interest and commitment of the Group to invest in the infrastructural development of Ogun State.

It is expected that as the investment drive gains momentum, Ogun State would begin to feel the impact of these collaborations. The State’s PPP is also expected to thrive further, as local and international private investors are continuously willing to bring their business to the state to enjoy its ease of doing business status

Abiodun also met with Konexa, an energy operator willing to invest in Africa, making Ogun State its location of choice.

The group was represented by the CEO, Pradeep Pursnani and the Senior Vice President, Partnerships & Impact, Simon Meier.

Konexa is an energy solutions company which specialises in and operates grid and off-grid energy systems across Africa. The group features as one of a number of investors the governor had earlier met with in London across sectors including housing, transportation, agribusiness, energy and manufacturing.

“We are looking to partner with Konexa on transforming the situation of energy in Ogun State, as the Group is readily willing to provide access to reliable power through cost-effective modern technologies,” Abiodun explained. Mr. Pursani assured that Konexa Group was more than willing to key into Governor’s Abiodun vision.

Perry Engineering Company Inc., is another company which would not be left behind, as its Export Sales Director, Rod Watson, outlined details of its partnership with Ogun State when Governor Abiodun had a meeting with the company’s team on Friday in London.

Governor Abiodun used the occasion to emphasise Ogun State march towards a mega-state and the administration’s resolve to continue with massive project execution to complement the palliative and construction works the government has already begun in road and infrastructure. Perry Engineering promises investment commitment in the planning, engineering and construction phases of the numerous projects.

The Dapo Abiodun administration has continued to engender affirmative partnerships (including Government-to-Government and Government-to-Business) to enhance infrastructure development and the quality of life in Ogun State. The governor is ready to welcome foreign investors to the state any moment from now.

A cross-section of Ogun State indigenes applauded Governor Abiodun for his outing at the Summit.  They commended the governor for his vision and leadership quality in conceiving and executing various landmark projects, especially the training and provision of jobs for unemployed youths.

Private sector investments are critical to the development of Africa, unfortunately, when it comes to attracting investments, many leaders have embarked on wild goose chase all over the world looking for the right kind of investors with little successes due to a mismatch of opportunities and investor needs or due to a lack of business environment framework that supports global best practices.

Where the opportunities are right and the business environment-friendly, investors will surely fall over themselves at the most subtle invitation. Abiodun has been able to match the needs and opportunities in his state with institutional investors and technical partners who attribute their willingness and excitement to work with the governor based on his compelling vision for Ogun State which no right-thinking investor can resist.