You’re ‘such an insensitive man’! – Apostle Suleman blasts Femi Adesina over comment on CAN 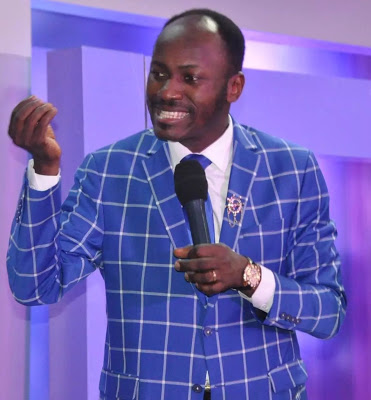 Suleman said Adesina’s reaction describing the Christian Association of Nigeria (CAN)  a political party is an empty defence.

The pastor, according to his tweet, said “Just saw the empty defence of Femi Adesina and his lashing CAN over the beheading of Rev Indimi.”

“Such an insensitive man is a presidential media aide? Certain positions should be given to people who have heads..even if they lack brains, we can manage ‘just head’.”

Reacting in a statement to the murder of Lawan Andimi, CAN chairman in Michika local government area in Adamawa state, by Boko Haram insurgents, the association asked President Muhammadu Buhari “to purge himself of the allegations of nepotism and religious favouritism by reconstituting the leadership of security outfits”.

In response, Adesina said CAN was speaking as if it was a political party.

He said it was reckless of CAN to suggest that the government is colluding with the insurgents.

“CAN says kidnappings and killings are shameful to a government that boasts that it has conquered insurgency. Boasts, so that is all that matters to CAN as if it was an opposition political party? Boasts. No. This would not augur for unity and cohesion in a country,” Adesina said in his statement.

“We are not asking the Christian body to be in bed with government, that would not help anybody, but the organization has been sounding too long like a political party.”