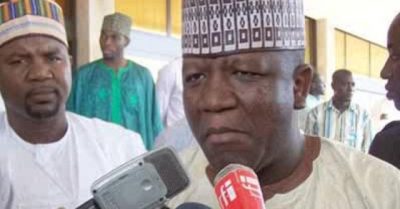 The NGF in a letter signed by Chairman and Governor of Zamfara, Abdulaziz Yari, and made available to newsmen on Sunday in Abuja, expressed “dismay and angst” over NFIU action as attempt to dabble into a matter that was beyond its mandate.

Yari accused the NFIU of “stoking mischief and also deliberately seeking to cause disaffection, chaos and overheat the polity”.

The NFIU, which was excised from the Economic and Financial Crimes Commission (EFCC), set June 1, 2019, as the takeoff date of the new order, making it compulsory for all local council allocations to go straight to their respective bank accounts.

The decision is contained in a guideline released by the NFIU after a meeting with officials of commercial banks in Abuja.

Yari said in the letter, dated May 15, that the guideline was not only illegal but was also an attempt by the NFIU to show total disregard for the Constitution of the Federal Republic of Nigeria (1999) as amended.

He said Section 7 (6) (a) and (b) of the Constitution confered on the National Assembly (NASS) and the Stale House of Assembly, the powers to make provisions for statutory allocation of public revenue to the local councils in the Federation and within the State, respectively.

The governor said that nothing in the NFIU Act 2018 gave the unit the powers that it sought to exercise in the recently released Guidelines.

He added that in doing that, the Unit had acted In excess of its powers and in complete disregard to the constitution of the country.

“The so-called Guidelines are in our view an exercised in mischief-stoking and one calculated to cause chaos and overheat the potty. The Guidelines have nine (9) previsions including two (2) sections covering sanction, penalties. powers that they clearly do not possess.

“The NFIU in proposing far reaching guidelines of this nature ought to have consulted widely and carried all stakeholders along.”

Yari urged Buhari to call to order, Director of the NFIU, saying such “reckless guidelines had the potential to cause disaffection in the country.

He said that in principle the NFIU should concentrate on its core mandate of Anti-money Laundering (AML) activities and Combatting Financing Terrorism (CFT) as prescribed in the Act establishing it and should desist from encroaching on or even breaching constitutional provisions.

The NFIU, according to Yari, was the Nigerian arm of the global Financial Intelligence Units (FIUs) once domiciled within the EFCC but now for the purpose of institutional location domiciled in the Central Bank of Nigeria.

“This means the NFIU is only mandated to trace or track laundered money that finds its way into terrorism financing and report such to the nation’s security agencies.”

Yaro advised the NFIU that it should seek to comply with those standards on combating Money Laundering and Financing of Terrorism and its proliferation as stipulated and not dabble into matters that were both constitutional and beyond NFIU purview.

“We invite Mr President to note that the Local Government is a creation of the Constitution and is neither a financial institution nor a Reporting entity and cannot be brought under the NFIU in the manner contemplated by the guidelines.

“Finally, Mr President may recall the role played by the Governors in getting the country out of recession and our contributions in strengthening the democratic experience In Nigeria.

“The NGF identifies with Mr President’s efforts to combat corruption, money laundering and terrorism amongst other social ills and will use our best endeavours in ensuring that our financial system is preserved through our concerted and individual efforts at fighting these ills.

“However, due process and constitutionalism are major planks in our journey to sustainable democracy.

“We appeal to Mr President to direct that the said Guidelines be disregarded in view of its unconstitutionality and total disregard for due process,” the petition read in part.

The letter was copied the Attorney General of the Federation, acting EFCC Chairman, Governor of CBN, Director General of DSS and the 36 State Governors.