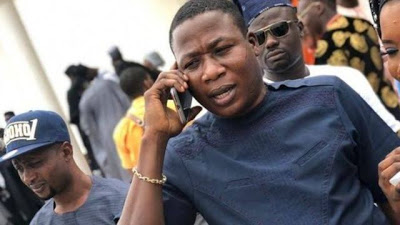 “We are more than capable of securing ourselves, we have chased them far from here.”

Some gunmen in the early hours of Monday reportedly attacked the Ibadan home of Sunday Adeyemo, popularly known as Sunday Igboho, a Yoruba youth and rights activist.

Following the attack, there are conflicting reports about those who carried out the invasion, but Igboho’s media aide, Olayomi Koiki,  claimed soldiers were behind the attack which reportedly happened around 2am.

“We are more than capable of securing ourselves, we have chased them far from here. We cannot be intimidated because we are fully prepared and ready for them. By tomorrow morning, I am sure the government would come with false press statements, that it was a set of unknown soldiers; that was the same tactic they used to attack Fela’s mother. They equally used it during EndSARS,” he said.

“They brought us a letter sometime ago but we rejected it because the letter was what they used to kill Dele Giwa. We have chosen to be peaceful only for them to keep looking for our trouble which we won’t hesitate to give to them.”

However, TheCable quoted Dapo Salami, who is also a media aide of Igboho, saying he cannot confirm the identity of those behind the attack. He also said the attackers were resisted.

“They came around 1am and began to shoot into the premises. They were however resisted from gaining entry. I cannot confirm the identity of the attackers now,” he said.

This is not the first time Igboho has come under attack. On January 26, 2021, one of his houses in Ibadan was set ablaze by hoodlums. He claimed at the time that it was the handiwork of attackers sympathetic to Fulani herdsmen.

He also claimed that security forces attempted to arrest him on Lagos-Ibadan expressway on February 26, 2021. Recently, he was served an invitation letter by the inspector-general of police but he refused to honour it.

The latest incident also happened in the early hours of April 26, 2021.

NEWS: ‘I thought he was still a comrade’ – Eedris reveals why he approached Keyamo for assistance in 2018