newsheadline247
Advertisement
HomeNationalHerdsmen Killings: To suggest that our administration is doing nothing is terribly...
National

Herdsmen Killings: To suggest that our administration is doing nothing is terribly unfair – Buhari 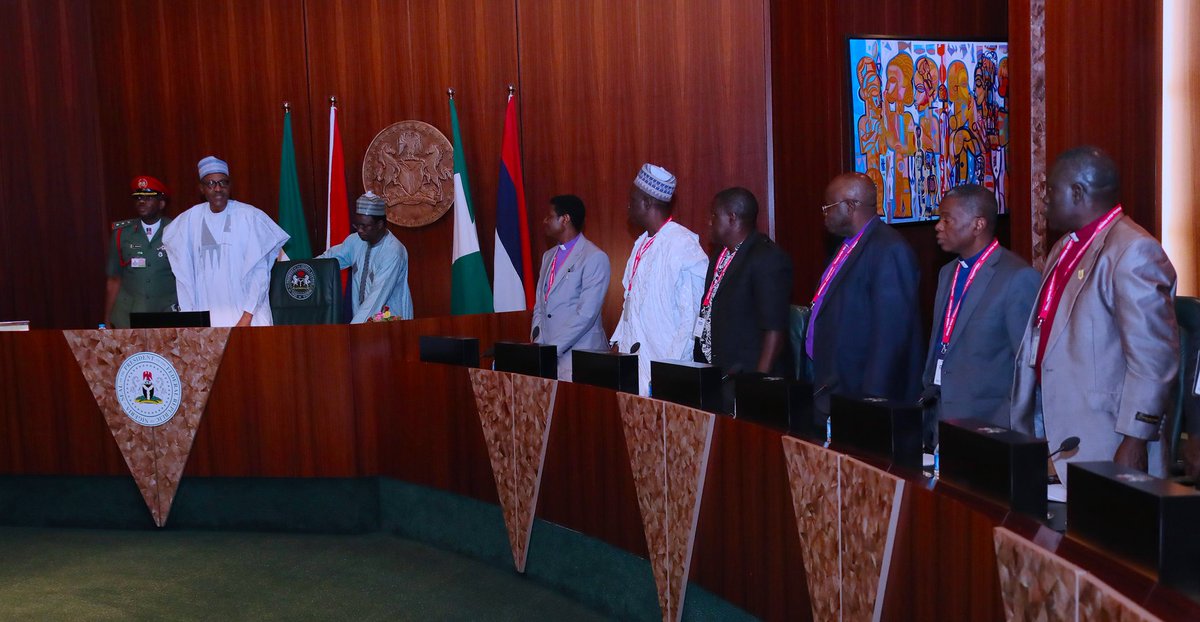 President Muhammadu Buhari says only evil-minded people will accuse him of condoning killings being carried out by suspected herdsmen TheCable NG reports.

Addressing a Christian Association of Nigeria (CAN) delegation from the 19 northern states at the presidential villa in Abuja on Thursday, Buhari said no right thinking individual will think that having secured substantial votes from the areas affected by the crisis, he will turn around to harm the same people.

Buhari also said those accusing his administration of doing nothing to stop the killings are being unfair.

He reiterated that killings did not start with his administration but he was doing everything to end it.

“When some (people), for clearly political purposes, attempt to suggest that this government is doing nothing about the killings, and that I, being Fulani, must be encouraging these satanic acts, it seems to me that there is no limit to the evil in the minds of these men,” he said.

“Otherwise, how can anyone in their right minds suggest that I, as an elected President even with substantial votes in the affected areas, will for any reason do harm by an act of omission to those same people?

“Secondly, the problems in all these areas, as you all know, are historical. There is no administration that has not had to contend with killings in these same areas over the years.

“Indeed, in 2001, you may recall that after thousands were killed in Plateau State, a state of emergency was declared and a governor was replaced by an administrator.

“To suggest that our administration is doing nothing is terribly unfair. We must not forget that the same Plateau state which has been crisis-ridden for years has in the past three years been celebrated for its peacefulness. The governor’s hard work for peace and the presence of the military’s Operation Safe Haven must have had some impact.”

Buhari told his guests that his administration had deployed extra special forces from the military in the troubled zone.

He also told the Christian leaders that the military and police had many suspects across the various flash-points in the region and several prosecutions were ongoing.

“The recent killings in Benue, Zamfara and lately Plateau are wicked, condemnable and completely unacceptable acts. We, Nigerians, are religious people and no religion or culture accepts the killing of people for any reason whatsoever,” he said.

“This is why we must all rise as one to condemn these vile and wicked acts to ensure that all the culprits are brought to justice.

“We owe it to the memory of those who lost their lives in the violence in Plateau, Benue, Nasarawa, Taraba, Zamfara and elsewhere since 1999 to bring the conflicts to a decisive end. I assure you that we will do this.

“Let me make it clear that even a single life lost in any part of the country is one too many. I came to office vowing to ensure the protection of lives and property, and I remain committed to this despite the challenges we have experienced.

“I, therefore, seek your support as clerics and religious leaders to join hands with this administration and give us your full support. As you all know, deploying law enforcement agencies is fully our responsibility as a government while creating the platform and mechanisms for dialogue is a collective effort.

“The military and police have arrested hundreds of suspects across the various flash-points in the region and several prosecutions are going on. In a number of cases, we have seen convictions.

“Nigerians are right when they say they want to see more convictions and I would like to appeal to the judiciary to help us fast-track these cases.”

He said the stakeholders included the media in whose hands he said lies the power to “frame, shape the perspectives and narratives which influence the thinking of millions of people within and outside Nigeria.”

“Finally, let us collectively shame those who are stoking the fires of ethnic and religious conflicts for their short-term political gains,” he said.

“This country belongs equally to Christians and Muslims and even those who claim ignorance of God.”