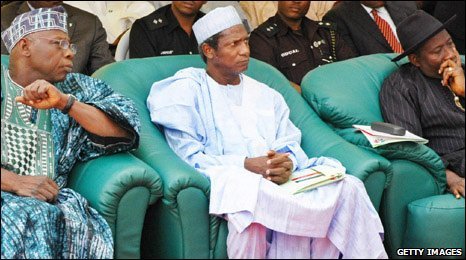 A new report by the Socio-Economic Rights and Accountability Project, SERAP, has revealed how over N11 trillion meant to provide regular electricity supply was allegedly squandered under the governments of former presidents Olusegun Obasanjo, Umaru Musa Yar’Adua and Goodluck Jonathan.

The 65 pages report launched on Wednesday at the Westown Hotels, Lagos is titled: From Darkness to Darkness: How Nigerians are Paying the Price for Corruption in the Electricity Sector.

The report, presented to the media by Yemi Oke, Ass. Professor, Energy/Electricity Law, Faculty of Law, University of Lagos, discloses that “the country has lost more megawatts in the post-privatisation era due to corruption, impunity, among other social challenges reflected in the report.”

The report shows that, “The much-publicised power sector reforms in Nigeria under the Electric Power Sector Reform Act of 2005 is yet to yield desired and/or anticipated fruits largely due to corruption and impunity of perpetrators, regulatory lapses and policy inconsistencies. Ordinary Nigerians continue to pay the price for corruption in the electricity sector–staying in darkness, but still made to pay crazy electricity bills.”

A senior lawyer, Femi Falana, who chaired the report launch said that, “This report is a must read, and I promise to lead in the follow-up litigation efforts to ensure the full implementation of the recommendations of the report.”

The report launch was also attended by Babatunde Irukera, the Director General/Chief Executive of the Consumer Protection Council, CPC; and, Ibrahim Magu Chairman Economic and Financial Crimes Commission, EFCC; who was represented by Osita Nwajah, Director Public Affairs EFCC. Both promised to work to ensure the full implementation of the recommendations contained in the report.

The report accuses Ransom Owan-led board of the Nigerian Electricity Regulatory Commission (NERC) of allegedly “settling officials with millions of Naira as severance packages and for embarrassing them with alleged Three Billion Naira (N3,000,000,000.00) Fraud. The authorities must undertake a thorough, impartial and transparent investigation as to the reasons why corruption charges were withdrawn, and to recover any corrupt funds.”

The report also called for the reopening and effective prosecution of corruption allegations, including the alleged “looting of the benefits of families of the deceased employees of Power Holding Company of Nigeria (PHCN) levelled against a former Permanent Secretary in the Ministry of Power, Godknows Igali.”

The report reads: “The Obasanjo’s administration spent $10 billion on NIPP with no results in terms of increase in power generation. $13.278,937,409.94 was expended on the power sector in eight yearswhile unfunded commitments amounted to $12 billion.”

“The Federal Government then budgeted a whopping N16 billion for the various reforms under Liyel Imoke (2003 to 2007) which went down the drains as it failed to generate the needed amount of electricity or meet the set goals. Imoke was alleged to have personally collected the sum of $7.8 million for the execution of the contract for the construction of the Jos-Yola Transmission Line, which was never executed. There were documented/reported allegations of corruption against Imoke that fizzled-out shortly thereafter.”

“Professor Chinedu Nebo handed over the assets of the PHCN to private investors on November 1, 2013. Prof. Nebo is alleged to have corruptly funded the privatized power sector with over N200 Billion despite privatization. The allegation of N200 Billion funding of the privatised power sector during Prof Nebo’s tenure should be thoroughly and transparently investigated and anyone suspected to be responsible prosecuted. Any corrupt funds should be fully recovered.”

“Our research revealed that the sum of N1.5 billion with which the vehicles were acquired was allegedly sourced from the diverted N27 billion insurance premium of deceased workers of the defunct Power Holding Company of Nigeria (PHCN).”

“The National Assembly and members should desist from and avoid manipulating the award of electricity contracts or cite projects in their constituencies under the guise of “Constituency Project”. The National Assembly should publish and ensure the full implementation of the recommendations of all power-related investigations to date.”

“The Federal Government should back-down from Rural Electrification initiatives and allow states to undertake rural electrification through their respective Local Governments and Development Areas. Federal Government should consider fully divesting its stakes in the power sector and allow for efficient, decentralized sector governance by Federal and State governments, as appropriate, in line with the provisions of the Second Schedule, paragraph 13 and 14 of the Constitution of the Federal Republic of Nigeria 1999 (as amended).”

“The 36 state governments should wake up to their rights, duties and obligations under the Constitution of the Federal Republic of Nigeria relating to the power sector by working to promote and ensure access to regular and uninterrupted electricity supply for all residents within their states. The 36 state governments have been abdicating the duties to the power sector, bearing in mind that Power is an item on the Concurrent Legislative List under the Nigerian Constitution 1999 (as amended).”

“When the late Bola Ige took up the mantle of the Power and Steel Ministry in 1999, he probably didn’t understand the magnitude of problems in the power sector and consequently, promised that within six months of his appointment, “power failure will be a thing of the past” and that on a regular basis, he will brief the nation on the state of power, steel and aluminum. Current minister Babatunde Fashola SAN also claimed that ‘a serious Government will fix the power problem in six months’”

“The power sector under Ige was characterised by epileptic and unreliable supply, bogus billing and archaic rate collection. The late minister failed and was unable to put an end to these. His failure was attributed to acts of sabotage and corruption by people who were benefitting from the use of generators. The late Bola Ige was not accused of corruption.”