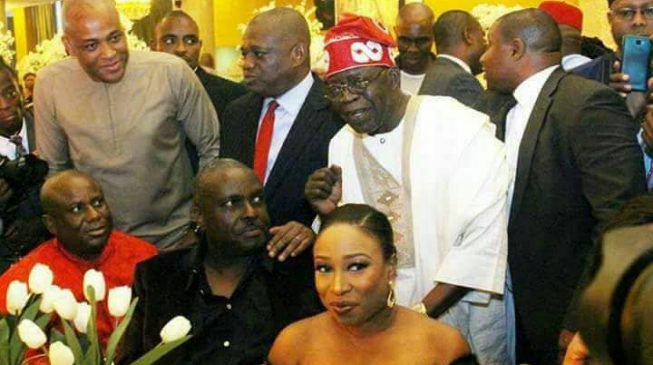 A picture of James Ibori, ex-governor of Delta state, with two of his former colleagues, is currently trending on social media.

The trio presided over their respective states between 1999 and 2007.

According to The CableNG reports, it is not clear where and when the picture was taken but there are indications that it is a recent photograph.

Ibori returned to the country earlier in the year after being jailed for corruption in the UK.

Although he stayed outside the country for six years, his influence did not wane.

This can be seen in the calibre of the people who have been visiting him since he returned.

They include Ifeanyi Okowa, incumbent governor of Delta, Seriake Dickson, governor of Bayelsa, among others.

Till date, he enjoys massive support in Oghara, his hometown in Delta state.

At a thanksgiving organised in his honour shortly after he was freed by the UK authorities, Ibori absolved himself of any wrongdoing.

“Today I have decided to speak for myself. I am not a thief, I cannot be a thief,” he had said.

“Today is the day they say I should give testimony to God, for those who know me, you know that my entire life is a testimony itself and I have said it over and over again that my life is fashioned by God, directed by God, sealed, acknowledged, blessed by God and I believe that since the day I was born.

“Like the archbishop said, when this whole commotion started, what was most painful to me was the pain and suffering that my people were going through.

“When I looked at how things were going, I discovered that they wanted to separate me from you people. They wanted me to go to the corner where I won’t be seen.”