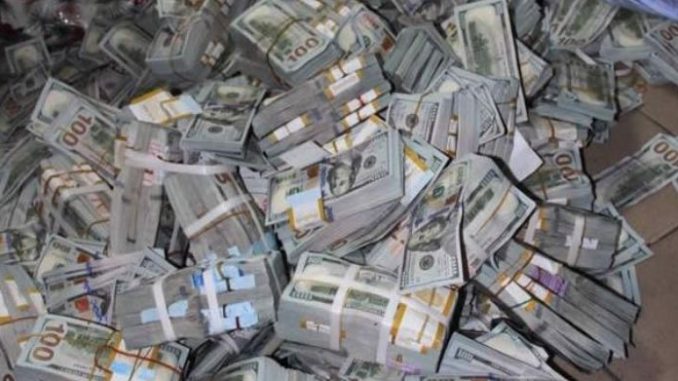 A Lagos Division of the Federal High Court on Friday ordered the final forfeiture of the N13 billion recovered in a flat in Ikoyi, Lagos, Premium Time NG reports.

The Economic and Financial Crimes Commission, EFCC, said it traced the ownership of the apartment to Folashade Oke, the wife of the former Director General of the National Intelligence Agency, NIA, Ayodele Oke.

It claimed that its investigations revealed that the woman bought the property with proceeds of fraud by her husband.

It urged the court to order the permanent forfeiture of the property to the Federal Government.

In her ruling on Friday, Mojisola Olatoregun, the judge, also granted the EFCC’s prayer, dismissing the objection by Union Bank, which claimed to have interest in the property.

According to Premium Times NG, the judge said she found from the papers filed before the court that the bank had already sold the property to Chobe Ventures Ltd., a company owned by Mrs. Oke.

“It appears to me that the interested party (Union Bank) is a busybody, who is crying more than the bereaved, having transferred all its rights on the property, the subject matter of this suit,” the judge said.

“The interested party has no legal reason to lodge any complaint on the steps being taken by the EFCC on the property, having divested its interest by the outright sale of the property to Chobe Ventures.

“I find the interested party’s motion, seeking to vacate the interim order of forfeiture granted by this court on November 9, 2017, as unmeritorious and same is struck out.

“From the affidavit evidence before the court, the applicant (EFCC) has shown clearly that the property sought to be forfeited was reasonably suspected to have been acquired with the proceeds of unlawful activities of Mr. and Mrs. Ayodele Oke in the name of Chobe Ventures. The fund belongs to the Federal Government of Nigeria, which, at the material time, is under the control of Ambassador Ayodele Oke.

“The respondent, Chobe Ventures Ltd., refused and neglected to either file any process or appear in court.

“Based on the provisions of Section 44 (3) (b) of the Constitution and Section 17 of the Advance Fee Fraud and Other Fraud Related Offences Act No. 14 of 2006, I hereby order the final forfeiture of a property described as Flat 7B, situated at No. 16, Osborne Road, Ikoyi, Lagos and its appurtenances to the Federal Government.”

Union Bank had, through its lawyer, Ajibola Aribisala, argued that the ownership of the flat had been transferred to it by virtue of a tripartite deed of legal mortgage of November 1, 2011 executed in its favour by a former two-term governor of Bauchi State, Adamu Mu’azu.

“The property was mortgaged to United Bank to secure a loan granted to Tripple A Properties & Investment Ltd. by Union Bank,” the bank said.

It said the original title deed was vested on it, adding that the loan’s tenor had expired but it was not liquidated.

According to the bank, the flat was sold to Chobe Ventures, owned by Mr. Oke’s wife, with an agreement that flat’s owner would observe several “covenants”, including payment of service charges, land use charge and levies, among others.

It added that non-observance of any of the terms of the agreement “will severely affect the other users of the property”.

Union Bank said Chobe Ventures’ act of allowing “strangers” to stash monies illegally in the flat violated their agreement, which entitles the bank to nullify the flat’s sale.

“The title of Chobe Ventures has not yet been registered and the legal title of the property still resides in Union Bank,” it said.

Among others, the bank said granting the order of final forfeiture would prevent it from enforcing the terms of the agreement on which the flat sale was based.

But the EFCC lawyer, Rotimi Oyedepo, opposed the application, urging the court to dismiss same and rather order the permanent forfeiture of the property to the Federal Government.

He said the bank’s application was designed to scuttle the forfeiture hearing and was done in bad faith.

He said since the bank had admitted selling the flat to Chobe Ventures, it would amount to, ”eating its cake and having it” by asking the court not to order the flat’s forfeiture.

Mr. Oyedepo said based on Section 17 of the Advance Fee Fraud and other Related Offences Act, any property that is reasonably suspected to be a proceed of crime is liable to be forfeited.

“I urge Your Lordship to grant this application, particularly in view of the fact that Chobe Ventures, who allegedly used the proceed of unlawful activity to acquire the property in issue, did not oppose this application or controvert the facts,” Mr. Oyedepo said.‎