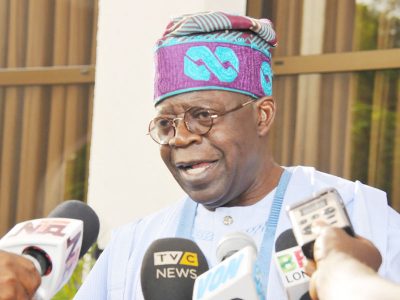 A national leader of the All Progressives Congress (APC), Sen. Bola Tinubu, has said that he would accept the result of the presidential election even if it did not go the way of the party.

The News Agency of Nigeria (NAN) reports that Tinubu spoke with journalists after voting at Polling Unit 047, Ward 3, Ikeja at 11:20am.

He said that the will of the electorate must be respected, adding that as a true democrat, free and fair elections must be protected.

Tinubu was, however, upbeat about his party’s chances of winning the elections.

“If my party is voted out in this election, I will accept it because it is the people’s verdict, that is their decision. Any democrat that cannot accept a result from a free and fair election is not worthy of that name.

“As a true democrat, you must be able to accept the results of a free and fair election.

“My hope and determination of my party is that we are winning this election because we have the support of the masses and if you look at our rallies, it is an indication of our party’s popularity that we are the populace.

“We are not talking about the elites or those that are rich, but the poor masses, farmers, traders, artisans and the common man who seek for continuity,” he said.

Tinubu, however, rated the conduct of the elections as successful so far, adding that though elections were expensive, yet it remained the best way of choosing leaders.

“The election has been successful so far, so good. It has demonstrated the resilience of the people and like the President has said; we have chosen the best way in a difficult way.

“Democracy is the toughest way of selecting a leader but the best system. With resilience of the people and strong determination we are getting there,” Tinubu said.