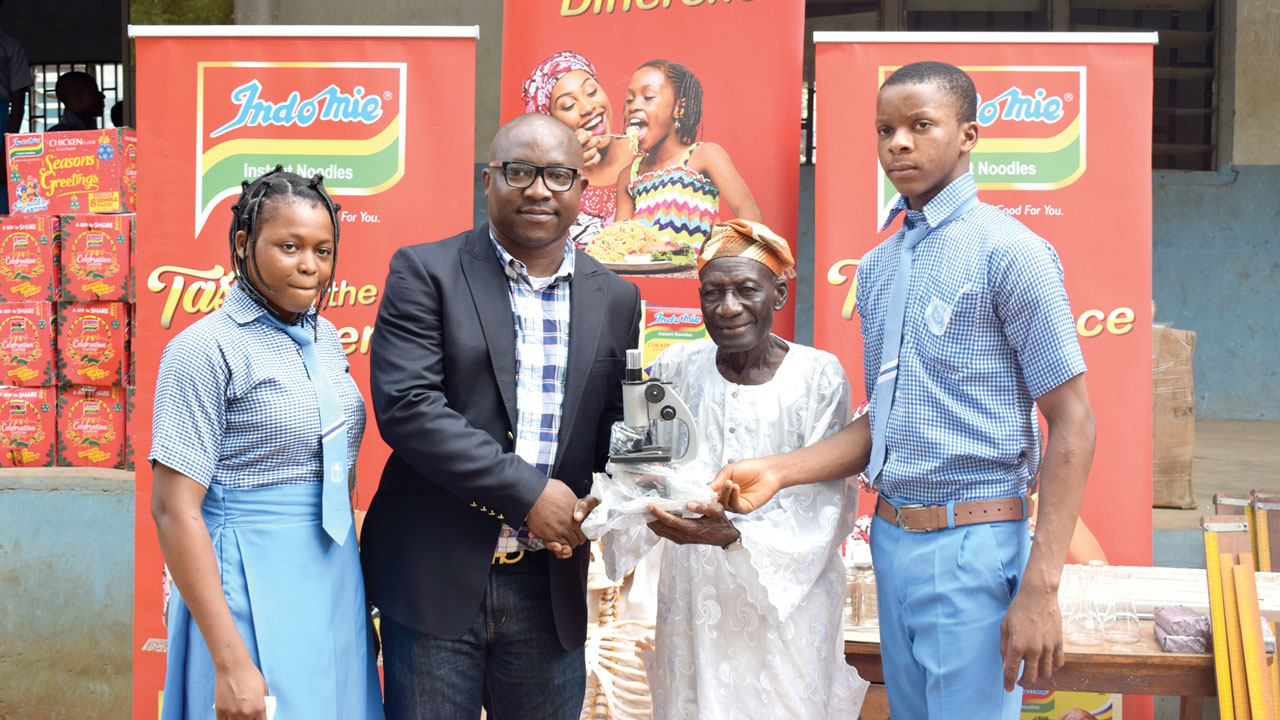 The Africa noodle giants handed over science laboratory equipment which includes conical flasks, beakers, skeleton, microscope and others to an excited group of teachers, pupils and their parents at the school premises last Tuesday.

Presenting the equipment to the school on behalf of the MD/CEO, Dufil Prima Foods Plc, Mr. Deepak Singhal, the Group Public Relations and Events Manager, Mr. Tope Ashiwaju, disclosed that the gesture by the company is to complement efforts by the government in providing necessary educational tools to enhance learning especially in the area of science and technical education.

“We do an environmental scan; it means that we go ahead to visit some of these schools and write them and see the state of their equipment. Thereafter we decided to do an intervention. That is why half of the time probably they’ve not seen us go into private schools because we don’t want to feed the overfed.  The public schools are those that need intervention, which is why we are here,” he said.

Ashiwaju also urged the teachers to make judicious use of the equipment to improve performance in science subjects, especially in the Senior Secondary Certificate Examination (SSCE) conducted by the West African Examinations Council (WAEC) and the National Examination Council (NECO).

He also promised that the company would be willing to support the school in other areas.

Vice Principal of the school in charge of administration, Mr Elijah Kehinde, said the equipment was an important addition to what the school already had.  He expects improved performance in the sciences.

Also responding on behalf of the parents, Chairman of The Parents Teachers Association (PTA),  Iganmode Grammar School, Mayor Hakeem Amodu, thanked the firm for the donation which he believed would make learning more practical.

On the benefits of the equipment to the pupils, Assistant Head Boy, Ebhodaghe Omoodion, said: “This is nice.  What we had in the laboratory before was not enough for a large number of pupils.  Even with this, we will need more because the school has over 5,000 pupils,” he said.

Iganmode Grammar School, an unprecedented three-time national mathematics champion had in the past won several state and national science related quiz competitions but have been lacking in physical infrastructure and other school amenities for decades.