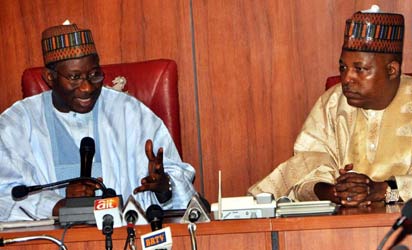 He said the governor exposed the girls of Chibok Secondary School to danger by failing to heed the federal government’s directive to relocate them while writing the West African School Certificate Examinations (WASCE).

Jonathan said this in reaction to Shettima’s claim that he nearly removed him as governor in 2014 over the disappearance of Chibok schoolgirls.

In a statement issued on Friday by Jonathan spokesman, Ikechukwu Eze, the former president also described ‘On a Platter of Gold- How Jonathan won and lost Nigeria’, a book written by Bolaji Abdullahi, as “sore grapes and full of lies and gossip”.

Our attention has been drawn to the claims made by the Governor of Borno State, Kashim Shettima on Thursday at a book launch to the effect that former President Dr. Goodluck Jonathan wasted the goodwill he commanded because of bad governance and poor choices in office. He was also said to have accused Jonathan of believing that he was behind the kidnap of the Chibok girls.

As a man who had never seen anything good in the administration of former President Goodluck Jonathan on account of party and other differences,  it has remained our considered view that in a democracy, Governor Kashim Shettima and others like him are entitled to their opinion, no matter how jaundiced.

However, it is a sad commentary on the character of some of our politicians that they go to any length to make spurious statements, in pursuit of the sad narrative to remain politically correct.  We cannot be deceived by his crocodile tears and patronizing claim that “Jonathan is essentially a decent man”, which is a ploy he deployed to justify his false allegation of a lost glory.

The man who today speaks of squandered goodwill should be able to tell Nigerians what percentage of the votes Jonathan got in 2011 from Borno State at the height of that his envisaged glory according to Shettima, and what it became in subsequent elections. What was obvious yesterday and has remained so today is that Governor Shettima and those who think like him never liked Jonathan based on some parochial and paternalistic sentiments.

We didn’t expect anything less from Governor Shettima, knowing the ignoble roles he played in frustrating the war waged by the past administration against Boko Haram, even in his own Borno State.

He should be able to tell us if it was Jonathan’s poor choices that led the Governor to expose students of Government Girls Secondary School in Chibok to avoidable danger, in total disregard of a Federal Government directive to the Governors in the three states most affected by Boko Haram to relocate their students writing the West African School Certificate Examinations to safe zones.

The Governor is now denying that he had no hand in the kidnap of the Chibok girls even before anybody accused him of culpability. However, we share the view of those who insist that the Governor had other things up his sleeve when he promised the West African Examinations Council (WAEC) that he would secure the girls, and ended up doing the very opposite, by deliberately abandoning them to their fate, without any security presence in their school.

It is instructive that while other Governors in the zone heeded the security advice, Shettima remained the only one that flagrantly flouted it. Should we also fail to point out that his decision to reward the principal of Chibok Secondary School, who was uncharacteristically absent on the night terrorists stormed the school, with the post of a commissioner, did throw up more questions than answers?

Talking about accountability, perhaps, Shettima should also do well to explain to the good people of Borno State and Nigerians what he did with the over N60 billion Local Governments fund, left by his predecessor, Senator Ali Modu Sheriff.

We understand Governor Shettima and those who spoke like him accused Jonathan of bad governance and poor choices, and we would like to know if it was bad governance that led Jonathan to assemble a-yet-to be matched crop of dynamic cabinet and economic management team made up of tested technocrats like Dr. Ngozi Okonjo-Iweala in Finance ministry, Dr. Shamsuddeen Usman in Planning, Mr Olusegun Aganga in Trade and Investments as well as Dr. Akinwumi Adesina leading the charge in Agriculture. The efforts of the Jonathan administration in repositioning Nigeria’s economy remain self-evident and it must have indeed been poor choices at their best for Jonathan and his team to have recorded the following key achievements:

* Nigeria’s Gross domestic Product rose to $503bn in 2013 and became Africa’s largest economy and 26th in the world; from 3rd and 46th respectively.

* Nigeria became the number one destination for Foreign Direct Investment in Africa under former President Jonathan, with the numbers rising from US$24.9 million as at 2007 to over US$ 35 billion in 2014.

* Jonathan Government delivered over 25,000 kilometres of motorable federal roads from just a quarter of that number in 2011.

*Jonathan’s Agricultural Transformation Agenda ended fertiliser racketeering, encouraged more young Nigerians to take to farming, boosted local food production and took the country closer to self-sufficiency in food production by recording more than 50% reduction in food imports. It was as a result of this that the Food and Agricultural Organization of the United Nations, for the first time, voted Nigeria the largest producer of Cassava in the world.

* Prices of food and other household items remained stable and inflationary pressure was down to a single digit.

* Under Jonathan, Nigeria controlled clinically Ebola outbreak to the admiration of the whole world,  became Guinea-worm-free and also eradicated polio, with United States billionaire and renowned philanthropist Bill Gates, praising Nigeria’s successes against polio as one of the great world achievements of 2014. Sadly polio has returned to the country with the likes of Shettima in charge of the endemic states.

*Just before Jonathan left office, CNN Money projected that Nigeria’s economy in 2015 would become the third fastest growing economy in the world at 7% behind China at 7.3% and Qatar at 7.1%.

Was it bad governance and poor choices that reformed the political and electoral processes to the extent that the United Nations is now pleading with the government of the day to strive to maintain the standards established by Jonathan?

Fortunately, Nigerians know where they stand with all of their leaders. All those who are calling Jonathan names today, and accusing him of having become quite unpopular, should simply take a walk on the streets of any Nigerian city as real leaders do. That way, they will accurately gauge their own approval and test their popularity with the Nigerian people.

On the book entitled “On a Platter of Gold- How Jonathan won and lost Nigeria” written by Mallam Bolaji Abdullahi, National Publicity Secretary of the All Progressives Congress, we have watched for some time as some outrageous fabrications are extracted from its pages day after day by the media. When the publication of the book, with an ominous title was first mooted, we knew it will be full of bile and sour grapes. We didn’t expect truth, sincerity and accuracy of narration, given that the author who was sacked from his ministerialposition by the subject of the book, is now the spokesman for the ruling APC.

We will therefore like to dissociate former President Jonathan from the book’s salacious contents, with all the obvious distortions, lies and exaggerations. Its pages are populated with gossip, politically influenced newspaper articles, uncoordinated raw data and unproven claims. Sadly, the author did not help matters, as there was no rigor or indepthinvestigations towards establishing the veracity of the allegations the book contained. For instance, it is ridiculous for the author to have claimed that the President was forced to sack a certain minister by another cabinet member when the obvious truth known to all key members of the administration was that the President acted based on the recommendation of an internal committee that investigated the matter. This, unfortunately, is the kind of baseless claims and narrative that run through the entire book, and it would be pointless devoting our time towards making a case by case response to all its ridiculous allegations.

We will like to remind Nigerians of what former President Jonathan said earlier in the year when a similar book was published, that only the key actors in his Government and in the 2015 Presidential elections could give an exact account of what transpired, not speculations and conjectures by third party spectators. That time will come someday.