HomeNationalJonathan to Osinbajo: Lying is your most consistent achievement in almost three...
NationalNews

Jonathan to Osinbajo: Lying is your most consistent achievement in almost three years as VP 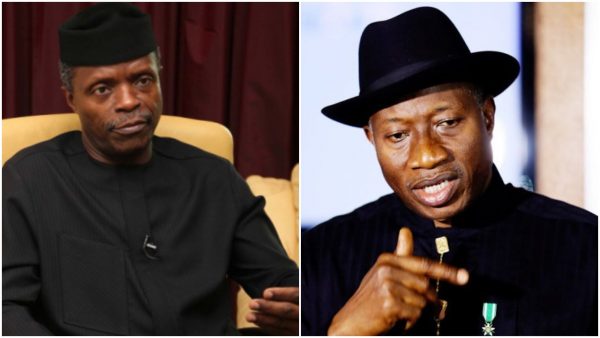 Former President, Goodluck Jonathan has challenged Vice President Yemi Osinbajo to show evidence that officials of his administration shared billions of dollars before the 2015 general election.

According to The Guardian NG, Osinbajo had on Monday at a business forum in Abuja alleged that the money in local and foreign currencies was carted away by a few elements in the Jonathan-led Peoples Democratic Party (PDP) administration.

“In one single transaction a few weeks to the elections in 2015, N100 billion and $295million were just carted away,” Osinbajo said.

He also alleged that promoters of the companies involved in the Strategic Alliance Contract with the Nigerian National Petroleum Corporation (NNPC) and the Niger Delta Development Commission (NDDC) made away with close to $3 billion.

Specifically, Osinbajo stirred the hornet’s nest on Monday when h‎e further alleged that whereas the Jonathan administration spent only N153 billion on infrastructure in the three years preceding 2014, N150 billion was shared in just two weeks before the 2015 elections.

He described corruption as a cankerworm that had become systemic in the country.

In a swift reaction, the PDP challenged the vice president to name those involved in the allegation, otherwise his claim would be regarded as part of the “figure propaganda and blame game” the ruling party has adopted to cover its ineptness since it assumed power in 2015.

In a statement by his former spokesman, Reno Omokri yesterday, Jonathan accused Osinbajo of repeatedly lying, saying the “vice-president has again surrendered his lips to Satan to be used to spread slander and lies.”

“Nigerians may recall that lying is the most consistent achievement of Prof. Osinbajo’s almost three years as vice-president.

“On this most recent allegation, let me state categorically that Jonathan did not share N150 billion two weeks to the 2015 election. If Osinbajo has proof that Jonathan did so, then we challenge him to publish his proof. He is a professor of law and ought to know that he who alleges must prove.

“Again, it is a lie from the pit of hell that the Jonathan administration spent only N14 billion on agriculture and N153 billion on infrastructure in three years as alleged by the fallacious Osinbajo,” the statement read.

On infrastructure, Omokri said the Jonathan government performed far better than the way it was assessed by the current administration, adding that in less than three years, the APC-led government had borrowed more than PDP did in 16 years.

“The Buhari administration, which in less than three years has borrowed more money than the PDP borrowed in 16 years, cannot point to even one major project they have started and completed.

“Both President Buhari and Osinbajo keep accusing the Jonathan administration of being corrupt and claim that they run an anti-corruption government,” Omokri said.

Meanwhile, the presidency has refrained from providing insight into what the President Muhammadu Buhari-led government is doing to recover the billions of dollars allegedly frittered away.

The Special Adviser to the President on Media and Publicity, Femi Adesina, yesterday simply told The Guardian to direct its enquiries to the office of Osinbajo.

The Guardian however had through an sms sought to know how much of the money had been recovered and what efforts the current administration was making to ‎arrest those who stole the billions, with a view to prosecuting them.

But the ‎Senior Special Assistant on Media and Publicity to the vice president, Laolu Akande, did not reply to the enquiries on the matter.

The Buhari administration has continued to make claims of mindboggling looting of the public treasury without coming out with specifics or publishing factsheets of audited accounts.

One point which seems to cast a hallow of doubt on such claims is that the PDP held a fundraising prior to the 2015 general elections for the presidential poll and its permanent secretariat building.

The party disclosed then that N1.2 trillion was realised from the fundraising, without going into specifics, even as no mention was made of the money after the party lost the election.

However, the ruling All Progressives Congress (APC) has continued to accuse PDP of mindless looting and associate the immediate past administration with wasting national wealth.

The ruling party has been accused of using the allegation of looting to divert attention from its own shortcomings, including the non-disclosure of the total cost of prolonged medical vacation of the president as well as the names of looters of the national treasury, the amount looted, how much has been recovered and on what terms.