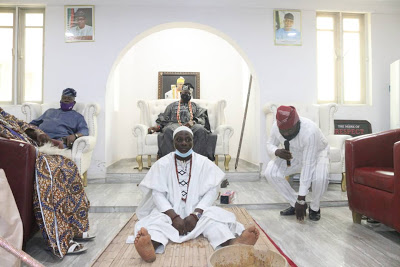 The new Onitigbo of Tigbo Ilu, HRH Oba Olabode Thomas-Fagbayi was formerly presented to the Olota of Otta, HRM Professor Adeyemi Obalanlege(Lanlege Ekun II) today, 19th August, 2020 in the ancient City of Otta to kick start the traditional rites in accordance with the customs of the land.

The traditional procession was led by High Chief Oladele Adeniji alongside the Aro of Otta in the presence of other respected traditional chiefs.

By this, the official traditional rites that will lead to the crowning of Kabiyesi Onitigbo has commenced.

Olota, during his goodwill message, prayed that gods of the land to protect the newly elected monarch, his subjects and entire people of Awori Kingdom.

In his response, the new monarch thanked Almighty God for making his journey to the throne. He equally appreciated the Executive Governor of Ogun State, Prince Dapo Abiodun MFR and his Deputy, Engr.(Mrs) Noimot Salako-Oyedele for their quality leadership towards building the future of the State.

Also, he expressed his gratitude to the Olota of Otta for his fatherly role in Tigbo Ilu, sub Otta township and Aworiland at large. He also used the opportunity to affirm his loyalty to the Olota of Otta and the cause of Aworiland. The Onitigbo-elect also thanked the Transition Chairman, Ado-Odo/Ota Local Government, Hon. Wasiu Lawal, Onitigbo in Council, family members and well wishers for their support towards his successful enthronement on the stool of his forebears.

The ex-international footballer turned monarch was accompanied by elders from Tigbo Royal Family, family members, well wishers and were well received by respected members of Olota in Council.