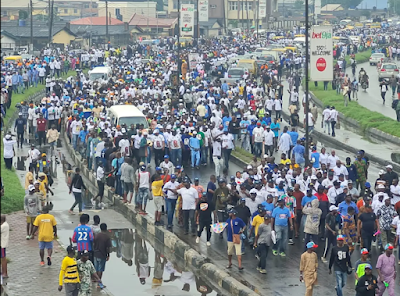 Lagos State was shut down on Sunday as thousands of supporters of the APC embarked on a “five million” solidarity walk in support of the presidential candidate of the party, Bola Tinubu and his running mate, Kashim Shettima, in the state.

The News Agency of Nigeria (NAN) reports that the political rally was organised by the Chairman of Lagos State Parks and Garages Management, Musiliu Akinsanya popularly called MC Oluomo, in collaboration with “Team Lagos, Nigeria’, a support group.

The rally was also to show support for the re-election of the Lagos state Governor, Babajide Sanwo-Olu, his running mate, Obafemi Hamzat, and all the APC candidates in the state.

The APC supporters, who defied the early downpour, converged on the entrance of Teslim Balogun Stadium in Surulere as early as 7.00 a.m.

The rally terminated at Bolade, Oshodi, with fanfare at noon.

MC Oluomo said the former Lagos state governor who laid the foundation for the progressive development of the state had the character, capacity and competence to provide leadership that everyone would be proud of in the country.

According to him, Tinubu has the experience and ability to replicate all the visible developments in Lagos state at the federal level if given the opportunity.

Also speaking, Waheed Seriki, one of the leaders of the APC support group in the rally, said: “Asiwaju Tinubu is prepared to change the narrative of the challenges facing the nation.

“Some areas that will enjoy priority of the incoming Tinubu’s administration include insecurity, power generation and employment creation.”

NAN reports that several political support groups of different presidential candidates have been staging solidarity walks in support of their candidates.

The Independent National Electoral Commission (INEC) lifted the ban on campaigns in public by political parties officially on 28 September.