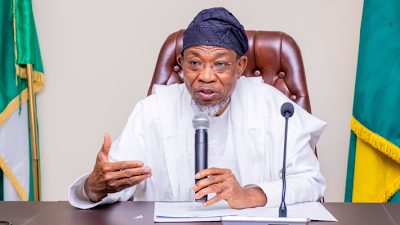 The Minister of Interior, Rauf Aregbesola, says he will meet with state governors to agree on the mass release of at least 30 per cent of inmates from custodial centres across the country.

Aregbesola made this known when he appeared on the News Agency of Nigeria (NAN) Forum in Abuja.

The minister said that the interface was necessary as more than 90 per cent of the inmates were being held for contravening various state’s laws.

Aregbesola also said that over 70 per cent of the 75,635 inmates at present were awaiting trial.

The minster said that the federal offenders in the system were far less than 10 per cent, adding that the bulk of people in custody were those who have run foul of state laws.

He said that they were therefore being kept under the legal jurisdiction of their respective states.

The minister added that the decongestion of the 253 custodial centres nationwide was necessary as some of the inmates have no reason to remain in custody.

Aregbesola, therefore, said all stakeholders must work towards a “better structured criminal justice administration, otherwise we will just be left with congested and overcrowded facilities.”

He said, “I have written the Nigerian Governors Forum to allow me to come and address them on how they can support the process of decongestion.

“Because the governors must buy into this system for us to do a massive decongestion especially of Awaiting Trial Inmates.

“If we get the buy in of state judicial authorities and the government of the states, we can pull out 30 per cent of those who are there.”

According to him, some of the awaiting trial inmates have stayed longer than the punishment provided by law for the crime they were arrested for.

“If you look at a man that is caught for petty theft and you are trying him for three years, even if you convict him for that crime, how long will he stay?

“How long will that fellow stay, probably six months, but without trial he will be there for three years.

“Again, you arrested a boy under the bridge, there is no fixed crime and he is there forever and so on and so forth.

“So, we need the buying in and support from state governments.

“This is for them to critically know the situation and let them set up committees that will profile all those who are there.

“And help either to convict, release them or see if they have overstayed their required time,” the minister said.

Aregbesola assured that the interior ministry was doing everything within its powers to decongest the custodial centres.

He said that the meeting with the governors would help to critically review the situation and relieve the system of inmates who should have been out.

The minister also said the administration of President Muhammadu Buhari has facilitated unprecedented development in the Nigerian Correctional Service (NCoS).

He disclosed this when he featured on the News Agency of Nigeria (NAN) Forum, in Abuja.

Aregbesola said that the development had a backwash effect on not just the Ministry of Interior but also the inmates of custodial centres nationwide.

“If any administration has given life to the reorientation of prison in the history of Nigeria, it is President Muhammadu Buhari’s administration.

“What he has done in making our penitentiary system a corrective one is historic.

“We had a prison system that was simply coercive, punitive and oppressive both in law and in operation of the law.

“From the name of that law, you know it is a reformatory document,” he said.

Aregbesola said that the reform has also changed the orientation of Nigerians, as many prisoners who served out their term came out as better citizens.

“As I am talking to you, we have Doctor of Philosophy students, we even have Phd graduates now from our correctional facilities.

“Thousands not hundreds, thousands upon thousands of people acquiring trade tests, craft skills and what have you.

“So, indeed, we are a champion in reformation, rehabilitation and reintegration of our inmates,” he said.

Aregbesola explained that the reformation, rehabilitation and reintegration of inmates affected only those convicted by a court of law, not those awaiting trial.

“Seventy per cent of those who are there are awaiting trial.

“It will be clear to us why it is usually difficult for ATIs who either after their trial they are freed to now be seen as product of our system that are not rehabilitated,” he said.

The minister assured that the federal government would continue to improve the condition of inmates in custodial centres, in line with global best practices.