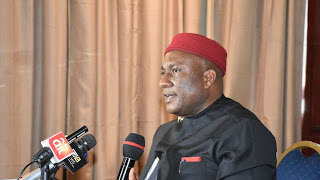 Johnmary Jideobi, a lawyer, has filed a suit at the federal high court in Abuja to stop the extradition of Allen Onyema, chief executive officer of Air Peace, to the US over alleged bank fraud and money laundering.

The US authorities had, Last week, said Onyema moved more than $20 million from Nigeria through US bank accounts in a scheme involving “false documents” based on the purchase of airplanes.

Onyema was indicted alongside Ejiroghene Eghagha, the airline’s chief of administration and finance, who is said to have committed aggravated identity theft in connection with the scheme.

On November 19, a US court was reported to have issued a warrant to arrest Onyema and authorised US marshals service to bring him into custody.

But the Abuja-based lawyer asked the court to bar the federal government from harassing, inviting or arresting Onyema.

Read Also Alleged N5.7bn SURE P Fraud: I have no evidence I took money to Shema says EFCC witness

The lawyer joined Abubakar Malami, attorney-general of the federation (AGF), as a respondent in the suit seeking the enforcement of the fundamental human rights of the airline chief.

In the reliefs brought before the court, the lawyer said the federal government or any of its agencies “is/are without powers to abridge the fundamental right of Onyema to freedom of movement as donated by Section 35 of the amended 1999 Constitution of the Federal Republic of Nigeria.

“That on the authority of Diamond Bank PLC vs. Opara (2018) LPELR-43907(SC) the Federal Government of Nigeria and or any of its agencies with prosecutorial powers as represented by the Respondent herein cannot derogate from the constitutional right to freedom of movement by attempting to forcefully expel and or extradite Onyema from the shores of the Federal Republic of Nigeria to any other country of the world for the purposes of any criminal trial whose substance arose from underlying civil aviation contracts,” he said.

“Cannot give effect to any extradition request from any country of the world in so far as the ingredients or constituent facts of the indictment and or charges underlying the said request are traceable to or related with or arose from diverse civil aviation contracts entered into by Onyema through his duly registered companies with other duly registered companies in other jurisdictions especially in the United States of America.

“The Applicant holds the clear belief that the Constitution of Nigeria alongside the extant Fundamental Rights Enforcement Procedure Rules, 2009 empowers him to initiate proactive steps to “protect these highly cherished Fundamental Rights of Onyema now that there is the likelihood that the Federal Government of Nigeria through any of its prosecutorial agencies” may abridge these rights.”

Onyema has since denied the allegation fraud, saying he is ready to clear his name.

Commenting on the issue, Laureta Onochie, an aide of President Muhammadu Buhari, had said the US only goes after law breakers.