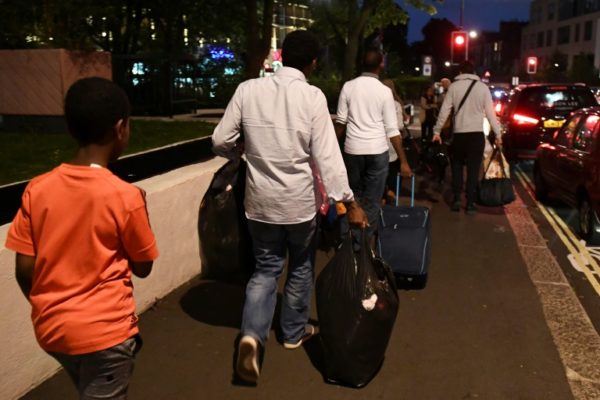 The evacuation was prompted by the fact that the  external cladding of the five towers in the estate, were similar to the one that triggered the Grenfell Tower fire disaster,  presumed to have killed 79 people.

The dramatic decision follows urgent testing of the towers’ exteriors, which were installed by the same contractor as the Grenfell Tower. As a result, Chalcots residents were being sent to hotels across the city.

Just hours earlier, police said that manslaughter charges could be brought over the Grenfell inferno, after finding that the fire started with a faulty fridge and the building’s cladding had failed safety tests.

“Grenfell changes everything and I don’t believe we can take any risks,” said Georgia Gould, leader of the Camden Council local authority, told reporters, as residents left the five Chalcots Estate towers.

“We could not be sure that people could be safe.

“We had to do this. We have to act on fire service advice.”

“We know it’s a scary time but we will make sure that they stay safe,” said Gould.

“The cost we can deal with later.”

The council has been booking hotels across London and the works are expected to take up to four weeks.

Michelle Urquhart, who has been living in the Chalcots Estate’s Bray tower, said the situation was “frightening”.

“I don’t know where we are going to go.

“One man in a suit said to me ‘you can’t stay here tonight’.

“We have been living in these flats for the last 10 years with this cladding.”

Chalcots resident Shirley Philips told Sky News television she had been given no notice before being told she must leave her home.

“It’s absolutely disgusting,” asking why the decision had been left so late in the day.

“Where do they think we’re all going?”

In an update early Saturday, Camden Council said they had secured “hundreds of hotel beds for Chalcots’ residents. We’re encouraging all residents to stay with friends and family if they can, otherwise we’ll provide accommodation.”