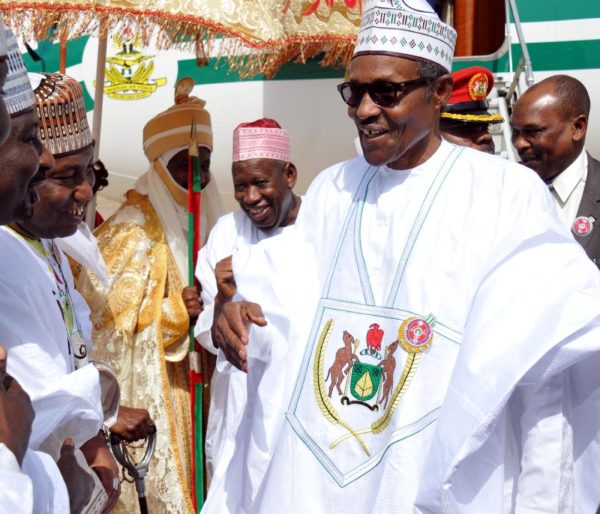 President Muhammadu Buhari on Wednesday night declared that the massive reception that greeted his arrival in Kano for a two-day working visit “is a message to the opposition’’ that his popularity in the region remains unshaken.

Speaking at state dinner held in his honour, Mr. Buhari was full of thanks and gratitude to the government and people of Kano for the very warm and peaceful reception.

‘‘I am overwhelmed with the massive reception I have received and definitely since this is partisan politics, I think it has sent a clear message to the opposition.

‘‘Even going by the details of the election results in 2003, 2007 and 2011, it was very clear that nobody could even dare to rig my scores from the elections in Kano.

‘‘It has been so consistent and I don’t think I have the vocabulary to express my thanks to the people of Kano.

‘‘I am very grateful to God and the people of Kano for the complete trust you have in me,’’ he said.

The president, according to a statement by his spokesperson, Garba Shehu, on Thursday noted that during his drive around the city on Wednesday to commission several projects, he observed that many of those who thronged the road to welcome him were very young people.

He said as a person in a position of authority, his priority is to provide a meaningful future for the teeming youth in the country through education, and the faithful management of the economy and resources.

The president congratulated Governor Abdullahi Ganduje on his development strides in the state and urged other political office holders to emulate and support the state governor.

‘‘He is a great politician and I am afraid I am still learning,’’ the president said.

Mr. Buhari reaffirmed that his message at his inaugural address, “I belong to everybody and I belong to nobody,’’ will continue to guide his stewardship to the Nigerian people.

‘‘My problem is Nigeria and I have been involved in almost all the instability Nigeria experienced: the civil war, the coups, and counter-coups. That was why I said during my swearing-in that ‘I belong to everybody and I belong to nobody.’”

‘‘Nigeria is my target and I will continue to maintain focus,’’ he said.