Mbaka attacks Buhari; says ‘Nigerians are dying in your hand, change or you will be changed’ 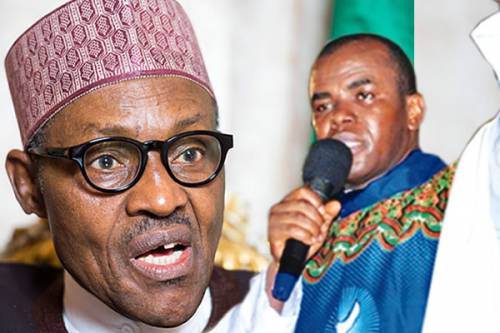 ……and PDP, others knock Buhari on economy, graft

He predicted the emergence, three years ago, of President Muhammadu Buhari. He fired stinging criticisms against his predecessor, Goodluck Jonathan. He even visited Aso Rock to receive a seeming post-inauguration ‘thank you’.

“Mr. President wake up. Sit up. God said you are toying with the privilege given to you. There is no time. Nigerians are dying in your hand. People are not happy with your system. Change or you will be changed,” said Mbaka at his popular Adoration Ground, in Enugu yesterday.

Delivering the warning, as part of his New Year message to Nigerians, the cleric disclosed: “God said that Buhari is in trouble. Buhari is hypnotised. Buhari is in a horrible bondage. Buhari’s mantra has been canibalised. Unless President Buhari quickly and strategically positions the right people and changes the former ones he inaugurated, the wind of change will blow him away shamefully.

“The wind will be too strong that Mr. President and the cabal will be blown out of office shamefully. The wind will be irresistible, for it will come like a hurricane. His office, if he is not careful, another will take.”

Presidency sources reached by The Guardian declined to comment.

Mbaka said if Buhari doesn’t want to move the country forward, “God will plan a strategy” for doing so. He alleged the president’s “pattern of battling corruption is not just archaic, barbaric, but is also a witch-hunt, and terribly selective.”

He added: “The Nigerian economy is in a shambles and Nigerians are in sorrow. The country is not just passing through an economic depression; it is also a time of economic repression and compression.

“The cabals have messed up the president and confused him. So, Mr. President, you are to be blamed, not your cabals. You have your brooms, but the cabals have their bags. Either you sweep them away or they throw you into the bag. The situation in Nigeria needs speed but you are too dull.”

The party’s National Publicity Secretary, Kola Ologbondiyan, in a statement yesterday said: “Instead of offering solutions or providing the indices for development, the presidency deployed over 2,000 words passing the buck, begging the question, making empty claims, and attempting to appropriate achievements of the PDP administration. What could be more depressing than the fact that the president, who is also the minister of petroleum resources, did not give a clear-cut solution to the acute fuel crisis bedevilling his nation today?”

He said: “The president’s speech neither addressed how to raise the fallen value of the naira nor how to rescue the labour market from the 8 million job losses and acute unemployment being suffered by Nigerians under the APC. The address completely failed to respond to issues of corruption under the APC regime, including allegations of budget padding, secret oil subsidy deals, illegal lifting of crude worth trillions of naira, pillaging of Nigeria’s foreign reserve, diversion of billions of naira for insurgency-related matters, all by APC interests.”

The Southern and Middle Belt Leaders Forum (SMLF) also faulted part of the president’s speech on the restructuring of the nation.

The forum in a statement noted: “We must devolve more powers and authorities to the federating units to have effective state administrations. The federal police have shown they lack the capacity to deal with crimes in a multi-ethnic society like ours. The imperative of state police has never been more urgent than now.

“Restructuring means nothing else but the above. It is a call for return to a Nigeria that worked under federalism as against the failing state we are becoming under a unitary structure.”

The Advocacy for Integrity and Economic Development (AIED) in a statement also described the president’s decision on restructuring as retrogressive, saying: “We read with shock the New Year’s address where he made an open disdain for the resounding clamour for the proper restructuring of this country. It is important we draw the attention of the president to his promise on restructuring and devolution while seeking power in 2015.

“It was on the strength of this promise, alongside numerous others, that Nigerians voted for President Buhari. It is therefore absurd that he can turn around and betray this solemn oath.”