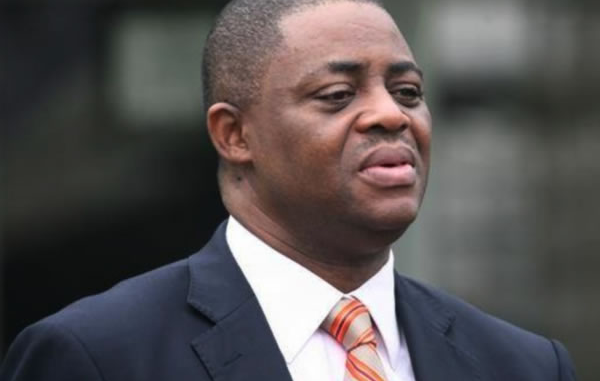 The courtroom at the Lagos Division of the Federal High Court broke into a suppressed laughter on Wednesday when Norris Quakers, the lawyer to former Aviation Minister, Femi Fani-Kayode, told the judge that his client’s complaint of a heart-related ailment should be taken seriously due to recent cases of heart-related deaths.

“It is not a laughing matter,” Mr. Quakers, a Senior Advocate of Nigeria, said, as his colleagues and their clients struggled to hush their laugh.

“They said he was complaining of a heart-related pain. We have seen recent cases of heart-related deaths. On Friday, a lawyer collapsed and died while addressing the court.”

Mr. Fani-Kayode, who was absent in court, and Nenadi Usman, a former minister of state for finance, are facing a 17-count of money laundering amounting to N4.6 billion.

Also joined as a defendant is Yusuf Danjuma, a former National Chairman of the Association of Local Government of Nigeria (ALGON) and Jointrust Dimensions Nigeria Limited.

They were re-arraigned by the Economic and Financial Crimes Commission in May, last year, after the earlier judge, Muslim Hassan, recused himself from the trial on the grounds that he was the EFCC officer who signed a criminal charge filed against him.

The 17 counts preferred against them border on conspiracy, unlawful retention of proceeds of theft and money laundering.

Mr. Fani-Kayode, who was the Director of Publicity of former President Jonathan’s re-election campaign organisation, was accused by the EFCC of receiving funds they ought to have reasonably known were proceeds of crime.

Addressing the court on Wednesday, Mr. Quakers, said it was unusual for Mr. Fani-Kayode to fail to attend his trial.

“The second defendant is unusually absent in court today as a result of a health challenge which information was relayed to me by the wife,” he said.

“In that regard, I have requested for a medical report and hoping that same will get to me before the close of work because the second defendant lives and carries out his business outside the jurisdiction of this court, in Abuja.

“My humble application is for us to come back tomorrow so I can furnish the court with the medical report.”

Mr. Quakers then made an application that the trial, which had been initially billed to hold on Wednesday and Thursday, be moved further so they could have “three clear dates for continuation of trial.”

Rotimi Oyedepo, counsel to the EFCC, did not oppose the application.

But he reminded the court of the provisions of Section 396(d) of the Administration of Criminal Justice Act which stipulates that both the prosecution and defence are entitled to not more than five adjournments each during a trial.

Mr. Quakers, however, argued that he had used only one adjournment.

Rilwan Aikawa, the judge, adjourned till February 28th, March 1st, and 2nd for the continuation of trial.

In September, last year, the judge had dismissed an application by Mr. Fani-Kayode to transfer the trial to Abuja on the grounds that the cause of action leading to the case took place there.