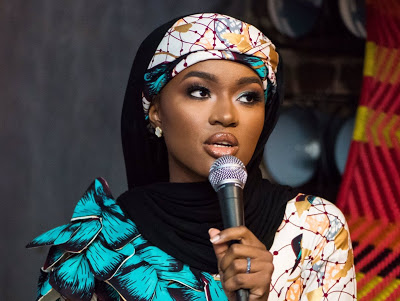 Daughter of President Muhammadu Buhari, Hanan, has denied ordering the Department of State Services to arrest and detain a trader, Anthony Okolie, for 10 weeks for using a telephone line that she previously owned.

Although Hanan agreed that the MTN sim card which caused dispute was once used by her but insisted she never reported the matter to the DSS.

The President’s daughter stated this among others in a counter-affidavit to the originating motion filed by Okolie.

Hanan in the 20 paragraph affidavit said although she was not happy with the complaint from the public that someone else was using her former sim card, but “I have never complained to the State Security Service or any law enforcement agency in Nigeria or outside the country to make arrest of anyone.”

The president’s daughter said she is being “accused of an allegation, she knows nothing about”.

Okolie had sued the DSS, Hanan and company, MTN for his 10-week ordeal in the security services’ detention.

The trader had accused the DSS of detaining him for 10 weeks, denying him bail and access to his lawyers for using a telephone line that was earlier owned by Hanan.

He alleged that the DSS detained him for 10 weeks because Hanan, who was schooling in the United Kingdom at the time, failed to come forward to clear him.

But the President’s daughter in her reaction to Okolie’s claims said she should not have been joined in the suit because she had no idea that he (Okolie) was ever arrested.

The affidavit read in part, “I was informed by the 2nd respondent (Hanan) in our office on February 15, 2020, around 4pm… that she never made any complaint against any Mr. Anthony Okolie to any officer in State Security Service or any other law enforcement agency.

“That she was not privileged to even know anybody with the name Anthony Okolie and has never reported him or any other person to any law enforcement agency in Nigeria or any other country throughout her life.

“That although she was not happy with the public complaint that someone had been using her old SIM card to solicit for financial assistance using her name, she never complained to any authority and she was not aware that the person’s name was Anthony Okolie until the media published it.”

The President’s daughter said she didn’t have the powers to give the DSS orders to detain anyone.

She further stated that no one should be punished for using a SIM card that was previously owned by another person as long as he didn’t use it to defraud unsuspecting members of the public.