HomeNationalNASS must Stop Buhari from withdrawing money from federation account without approval...
FeaturedNationalNews 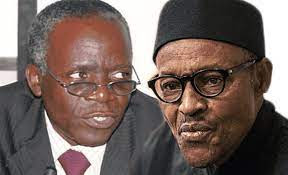 Femi Falana, SAN and a human rights activist, has said the National Assembly must stop President Muhammadu Buhari from withdrawing money from the federation account without its approval, claiming the Central Bank of Nigeria, the International Monetary Fund, and the World Bank have taken charge of Nigeria’s economy.

The legal luminary made the appeal while speaking at the South-West zonal public hearing of the House of Representatives Special Committee on the Review of the 1999 Constitution in Lagos on Wednesday.

Falana, who spoke on behalf of Alliance on Surviving COVID-19 and Beyond (ASCAB), said the government should engage rather than declare war on separatists groups.

“We are suggesting that the federal government should enter into meaningful dialogue with all separatists groups so that perceived injustice can be addressed. This is the only way to guarantee peace in the country,” he said.

He urged the National Assembly to control the nation’s economy and ensure that every spending goes through appropriation.

“Right now, the Central Bank of Nigeria and the IMF and World Bank have taken over the control of the economy of the country.

“We want to appeal to you, don’t allow the executives to withdraw money from the federation account to another account without appropriation of the National Assembly,” he added.

Falana stressed the need for the National Assembly to ensure that the Social Security Bill worked to tackle some of the security challenges facing the nation.

According to him, the country has to address unemployment and take care of the unemployed so that the rich can sleep with their two eyes closed.

Also speaking at the public hearing, Festus Olubodun of the Voices for Food Security called for quick passage of the long-standing bill on food as a human right in Nigeria.

Mr Olubodun said, “We respectfully demand the passage of the Right to Food Bill now before the expiration of the present Assembly.

“We are here today, with our message coded in the document herewith delivered to political aspirants, titled ‘The Hungry And The Rest Of Us A Food Security And Right To Food Manifesto For Nigeria.’

The don said food was a fundamental human right, not just mere human need, and it was a Universal Human Right to tackle some of the security challenges.

In her remarks, Nkeiruka Onyejeocha, Deputy Chief Whip, House of Representatives, and Chairman of the Committee on Constitution Review for the South-West, assured stakeholders that their submissions and recommendations would be looked into.

NEWS: Nigerian Govt. will go to war with South East if it’s what they want – Senator Bulkachuwa