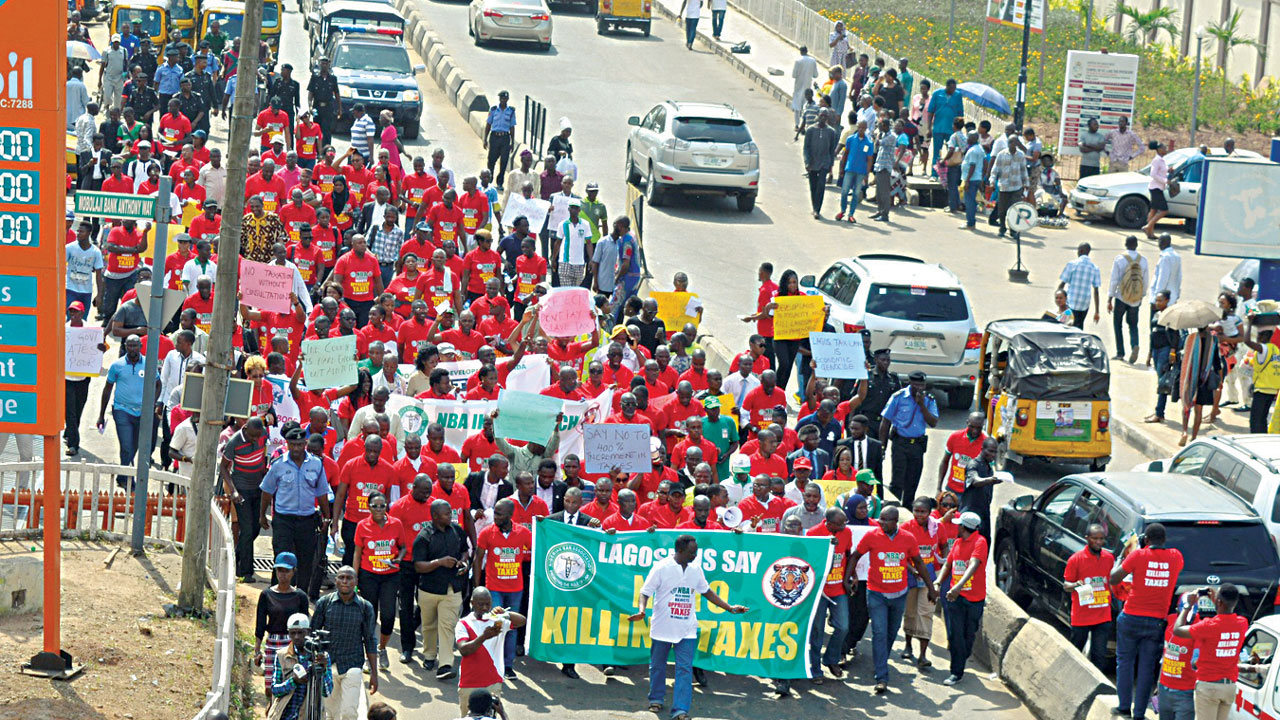 Members of the Nigerian Bar Association (NBA), Ikeja branch yesterday protested against the increase in the Land Use Charge (LUC) law in Lagos State, The Guardian NG reports.

The lawyers during the protest marched from the Bar Centre of the Ikeja High Court to the Governor’s office in Alausa, Ikeja, carrying a banner and various placards with inscriptions lamenting over the law.

Led by the Chairman of the Lagos NBA, Adesina Ogunlana and joined by other leaders of civil societies and non-governmental organisations, they charged Governor Akinwunmi Ambode and the lawmakers to suspend the application of the reviewed LUC.

During the long walk, they shared handbills to motorists, market women and other passersby as they sang solidarity songs. Inscriptions on the placards include: “Stop killing justice in Lagos,” “No to hike in Land Use Charge, LUC, CDHR,” “The country is hard enough don’t add to it.” Others are: “Developing Lagos to megacity and kill Lagosians with Pharaoric taxes,” “No to taxes without consultation,” “Lagosians commit suicide daily, stop this hardship.” among others.

The NBA Chairman, Adeshina Ogunlana who faulted the enactment of the law, tasked the government to rethink and review the land use charge and other obnoxious charges in the state.He said: “ The Land Use Charge is still a shock to many of us. While many people are still committing suicides daily due to hardship, it is so sad that the state government is contributing to what the people are going through.

“Our purpose is to communicate our grievances. We have a letter for the governor and we have anticipated that the Lagos Assembly will be more accessible than the office of the governor.”“Even the said law was passed without wide and proper consultations, the legislation actually usurps the power of the local government.”

The group said the law would cause hyper inflation in food, transport, accommodation, among others things for Lagosians.A letter titled, “Call for a re-think and review of the land use charge tax, all other excessive taxes, levies and charges in Lagos State,” was handed to the Commissioner for information and strategy, Mr. Kehinde Bamigbetan, because the governor and the speaker were said to be unavailable.Addressing the protesters, the Speaker of the House, Mudashiru Obasa, represented by the Majority Leader, Sanai Agunbiade assures them of a redress.He also encouraged the public to always attend public hearings, stressing that that is where all bills are opened to debate before they are passed into laws.

“The purpose of public hearings is to take the input of members of the public. There is no public hearing that we do that is not advertised in national newspapers for stakeholder’s input.“We expect more people to attend public hearings and contribute their quota. The governor is a listening person and what affects one person affects all. Necessary steps will be taken. We represent the people and the governor is also there to serve the people,” he said.