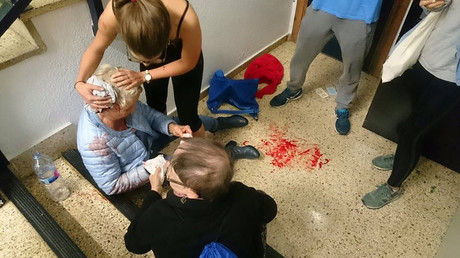 According to the regional government, some 844 people have been injured in disturbances across Catalonia

Spanish riot police have violently clashed with people who had gathered for a banned referendum on the region’s independence from Spain, injuring nearly 850 people.

According to the regional government, some 844 people have been injured in disturbances across Catalonia on Sunday.

Catalan representative said that two people are in a critical condition, one of which is likely to not survive their injuries, reported RPP.

Shocking images and videos of police repression have been shared across social media platforms with users condemning the excessive use of force.

The hashtag #NoEnMiNombre, or Not In My Name, has been used to denounce the violence.

The president of Catalan, Carles Puigdemont, has also condemned the violence.

“Today, the Spanish state has written a shameful page in its history with Catalonia,” he said at a press conference.

In Madrid, people have gathered in the Plaza del Sol to show their solidarity with the people of Catalan.

“The Plaza de Sol in Madrid is filled with people against Rajoy’s repression, who made a grave error in trying to isolate Catalonia on its referendum day.” 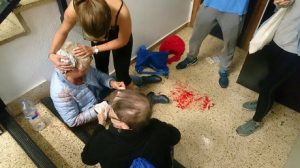 As Spanish police wielded batons and fired rubber bullets at crowds attempting to vote in Catalonia’s banned independence referendum, the region’s own police force gave many voters a much gentler reception.

In Catalonia’s pro-independence heartland, among the farming towns of Osona county north of Barcelona, the Catalan force made little attempt to remove people from polling stations despite being tasked with the same court order to shut them down.

Local courts received several complaints on Sunday against the Catalan police accusing them of inactivity and failing to close polling stations, despite the court order, the region’s High Court said in a statement.  Source: 24online.news