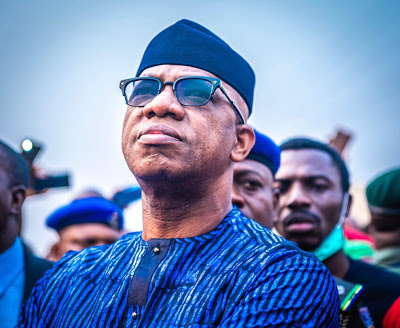 Ogun State has seen remarkable changes in governance and development in the ten months of Governor Dapo Abiodun of Ogun State being in office.

A 21st century political leader, and accomplished corporate player before his job, Governor Dapo Abiodun knows the underpinnings for a prosperous state. This explains the on-going revolution in infrastructure, health, education, and Information and Communications Technology.

Ten of such landmark projects captured during a recent media tour are as follow:

Built on expanse of land that once housed an abandoned school, the STEM Centre is the result of government-private sector partnership. In the words of Governor Abiodun, the centre is the one-stop-shop for technological innovations across Africa where start-up companies will conveniently be set up.” Knowing the world is on a quick drive into becoming a smart global village, Governor Abiodun is determined to give Ogun State a competitive edge in technology and innovations for the future that has come. Though this remarkable idea is set in Ogun State, the STEM centre achieving its full potentials will definitely revolutionise both the state and national economies, particularly in terms of wealth creation, inclusive growth and sustainable development.

Commissioned in February, the ICT centre, located on the premises of the state-owned Olabisi Onabanjo University, Ago Iwoye, is a 3,000-capacity multi-purpose complex. The centre is provided with cutting-edge tech facilities and has 24-hour internet connectivity. Here, students receive hands-on training in various ICT courses from tech experts and do so in an ambience conducive to learning

The idea to reconstruct the Ijebu-Epe Road into a ten-lane highway has fetched Governor Dapo Abiodun torrent of plaudits from road users. For several years, the pothole-ridden road has been a nightmare to its users, posing hazards to lives and commercial goods, dwindling productivity, and unnecessarily elongating travel time.

With construction works being done by Craneburg Construction Ltd, the government is set to lock such hardship in the past. The new project, when completed, will have a toll plaza comprising 14 payment points. The road is expected to provide easy access to the Lagos-Ibadan Expressway while aiding movement of goods as well.

On this, Governor Abiodun said: I made a promise that our administration will rehabilitate and reconstruct the Ogun end of the Ijebu-Ode-Epe road to bring succour to our people and engender the economic development of our state.

Launched in September 2019, about four months into his administration, the Oko-owo Dapo is an empowerment initiative to provide funds to women who are involved in legitimate SMEs across the state. It also aims to enhance trade as well as micro, small and medium scale enterprises. 2000 women benefitted in the first phase of the initiative as it is envisaged to reach at least 100,000 women in the first year of the Abiodun-administration. Beneficiaries could be market women, politicians, members of women’s societies, religious associations or trade associations. The governor revealed that the initiative is a social intervention programme borne out of the passion to make life better for Ogun people.

One of the earliest initiatives that pleasantly amazed many in the state was the launch of the Ogun Job Portal, which aimed to tackle the scourge of unemployment by linking the states unemployed youths with matching job opportunities in the labour market. Describing the job portal as one of the initiatives that would take the good people of Ogun State out of unemployment while also bettering the career chances of the employed, Governor Abiodun said that the portal is particularly suited to prepare the people to fit into appropriate sectors while revitalising all the sectors of the state’s economy. To underscore his seriousness in this regard, one of the earliest appointments Governor Abiodun made was that of Olalekan Olude, an award-winning entrepreneur, co-founder of Jobberman Limited, the leading job site in sub-Saharan Africa and founding partner of the African Talents Company in South Africa. Olude is also the co-founder and Executive Director at Rovedana Limited, a business process outsourcing company that provides employment to more than 2000 Nigerians across different industries and specialises in upscaling and placing them into employment with over 100 companies.

Security is integral to the prosperity and growth of any state or nation. And Governor Abiodun is blithely aware of this. He did promise at the outset of his administration that he would leave no stone unturned to ensure that the state maximised its potential to the fullest by creating an enabling environment for residents and prospective investors. Firstly, he inaugurated the Security Trust Fund committee headed by Bolaji Balogun, Chief Executive Officer of Chapel Hill Denham, one of Nigeria’s pre-eminent investment banking firms, to source funds for the acquisition and deployment of security equipment, personnel gear and other resources necessary to prevent crime and preserve public peace in Ogun State.

The committee is also to promote the synergy of all security agencies in the state and mobilise support in cash or kind from public and private sources in a transparent and accountable manner. Secondly, the governor signed into law the State Security Trust Fund Bill. Thirdly, he procured 100 Patrol Vehicles and 200 Bikes to aid the activities of law enforcement agents in the state while reiterating his support for efforts and ideas that would make Ogun a crime-free state. Just recently, the governor also signed into law the creation of the Western Nigeria Security outfit, Operation Amotekun.

To serve as a quick fix mechanism to address the deplorable condition of the township and rural roads in the state, Governor Abiodun established the Ogun State Public Works Agency because, Infrastructure, for us, is key to development. We have been able to demonstrate a commitment to the continued socio-economic development of our dear state, particularly in education, health, infrastructure and other key sectors that have a direct and positive impact on our people.

You will recall that we requested that our people should select roads that should attract immediate attention in each of the 236 wards across our dear state. These roads are receiving an immediate intervention. This is in addition to governments identified projects that will be spread across the three senatorial districts of our dear state.

As our team went around the state that Wednesday, it was evident that the agency is proving to be efficient and responsive in rehabilitating roads.

WATER FOR ALL IN OGUN

The bucolic community of Arakanga in Abeokuta North Local Government Area of the state is home to the Ogun State Water Corporation. Alas, even people in that community suffer from water scarcity as much as people in urban areas like the state capital, Abeokuta.

Governor Abiodun would discover on assumption of office that potable water was scarce in many homes around Abeokuta and beyond. For a governor who believes that water is not only an essential commodity but a right to which people should not be denied, he didnt see why the situation should persist regardless of the challenges. Thus, he embarked on an assessment tour of the water corporation where he was confronted with the state of disuse of the corporation, which has a pumping capacity of 103.68 million litres per day. There, the governor announced that water would not only be restored, he ordered the prompt repair and restoration of faulty transformers in the corporation.

As our team moved around the state, the story was different; availability of water was the song on virtually everybodys lips. What changed within months? Governor Abiodun!

With the spread of the dreaded Coronavirus Disease, COVID-19, across the world; and the fears that Nigeria stands susceptible, Governor Abiodun has been widely praised for his proactive efforts in putting a rein on its outbreak in the state. Lagos is Africas most populous city and Ogun is its closest neighbour.

When the Italian index patient was discovered in Lagos and possible contacts traced to Ogun State, Governor Abiodun rose to the occasion by informing the public that the 28 people who had contact with the Italian have been identified and quarantined and that the firm where he visited in Ewekoro has also been shut down. The 28 people were identified after the state government conducted a contact tracing through the Disease Surveillance Notification Centres (DSNC) set up in all 20 local government areas of the state.

The OOUTH has been designated and empowered specifically to be a DSNC in the case of an outbreak. The plan was for our team to see if we could get within shouting distance of the DSNC but as it was running late, and with no one to take us there, we took our leave but not without being shown some ongoing projects within the hospital.

THE PEACEMAKER AND PACIFIST

Even when politicking was rife with hate and propaganda, Governor Abiodun never returned fire for fire or wavered in his adoption of soft power  that sheer ability not to use force or coercion for political gain when you can shape the dissidents or oppositions long-term attitudes and preferences by tact and diplomacy. And it is working perfectly for him. Perhaps seeing the enviable and exciting direction Governor Abiodun is steering the ship of state, a coalition of opposition members formally declared for the All Progressives Congress, APC.

Some of the notable defectors include Chief Gboyega Nasir Isiaka (GNI), the gubernatorial candidate of the African Democratic Congress (ADC) in the March 2019 governorship election in the state; Mrs Salmot Badru, a former deputy governor under the Otunba Gbenga Daniel administration; Joju Fadairo, former state chairman of the Peoples Democratic Party (PDP); Chief Iyabo Apampa, former PDP Board of Trustees (BoT) member; Hon. Ayo Odugbesan, former Deputy Speaker of the State House of Assembly; and Hon. Dave Salami, a two-time member of the House of Representatives on the platform of the PDP, among others. Opposition members like Ladi Adebutu, former Governor Gbenga Daniel and Senator Buruji Kashamu have openly embraced the governor.

newsheadline247 - December 5, 2022
The Economic and Financial Crimes Commission (EFCC) on Monday arraigned a former employee of Union Bank, Abdulmalik Salau, and two others for cybercrime and money laundering...
AGENCY REPORT