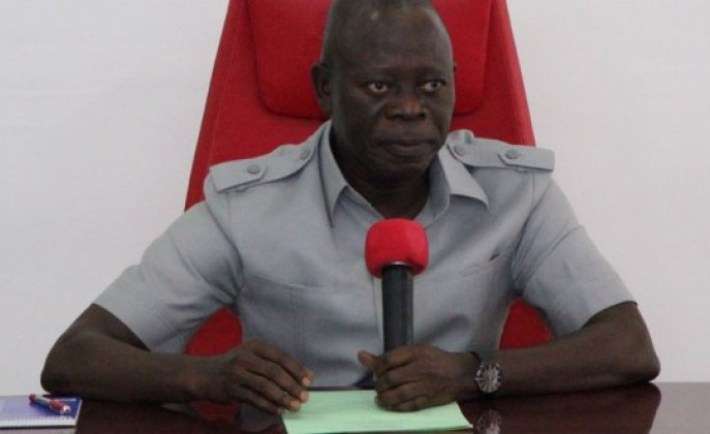 A former governor of Edo state, Adams Oshiomhole is set to battle Ogbonnaya Onu, minister of science and technology; and Ken Nnamani, ex-senate president for the position of the national chairman of the All Progressives Congress (APC).

The trio has shown interest and are seeking to succeed John Oyegun, outgoing chairman of the party ahead of the 2019 general election.

Report monitored on Daily Trust NG  indicates the trio are battling to lead the ruling party into the next election.

Until the reversal of a decision, Oyegun was almost sure of retaining his position beyond the 2019 election.

The national executive committee (NEC) of the APC had extended his tenure and that of the chairmen of the 36 states by a year.

The president voided the elongation of the tenure of executive members of the party at the states and national level.

Recall that the extension was proposed at the APC’s NEC meeting held about a month ago. The current NEC’s tenure ends in June.

Speaking at a NEC meeting in March, Buhari said he decided to withdraw support for the tenure extension to avoid a legal battle that could jeopardise the party’s cohesion before the 2019 general election.

“I think it is important to talk on the contentious issues of the tenure of our national and state executive officers. As we all know, the motion was moved at the last NEC meeting February 27, 2018, to the effect that when the tenure of the current executive expires in June this year, they should be allowed to continue for one year,” he said.

“On my own part, I have taken some time to review and seek advice on the resolution and what I have found is that it contravenes our party constitution and the constitution of the Federal Republic of Nigeria. In this circumstance, what is expected of us is to conduct fresh election once the tenure of the current executives approaches its end.”

Some political analysts said Buhari’s action was taken to please Bola Tinubu, a national leader of the party, who did not hide his wish to get Oyegun out of office.

Despite Buhari’s opposition, Bolaji Abdullahi, spokesman of the APC, said the decision to elongate Oyegun’s tenure was still valid but that a committee had been set up to analyse the issues the president raised.

“You know that any issue that goes to court is sub-judicial. Then, that also presented its own complications so the NEC decided to set up a small team that will advise the party on the way forward,” Abdullahi had told reporters.

“There is a technical committee that is looking at it. At the moment, there is no decision taken.”

More than 72 hours after Abdullahi’s comment, the party has not made its position known.

But there are indications that a new chairman of the party would emerge at a convention slated for June.

Although Oyegun has the right to re-contest, the chances of winning are slim since he does not have the support of the heavyweights of the party.

Of the top three contenders listed, Daily Trust rated Oshiomhole as the strongest, quoting sources as saying he enjoys the support of Buhari and Tinubu.

Oshiomhole and Oyegun are both from Edo.