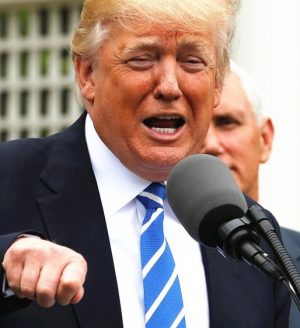 US President Donald Trump accused Mexico on Sunday of doing “very little” to stop the flow of people across the US border, and threatened to target the North American Free Trade Agreement in retaliation.

His Easter Sunday comments on Twitter came in apparent response to the movement of hundreds of Central Americans who have joined a “migrant viacrucis” (“way of the cross”) caravan headed for the US border.

“Mexico is doing very little, if not NOTHING, at stopping people from flowing into Mexico through their Southern Border, and then into the U.S. They laugh at our dumb immigration laws,” the president tweeted.

“They must stop the big drug and people flows, or I will stop their cash cow, NAFTA. NEED WALL!”

A group called Pueblo Sin Frontera, or People Without Borders, organized the mass movement through Mexico as a way of helping Central American migrants avoid criminal gangs and harassment by authorities as they trek to the US border.

The caravan spent last night in the southwestern state of Oaxaca, in a region called the Isthmus of Tehuantepec. They are next headed to Veracruz state, mostly traveling by bus.

The original caravan consisted of about 40 migrants who crossed the border from Central America. It set off on March 25 from the southern Mexican state of Chiapas, swelling along the way to about 1,500 people.

On Sunday “Fox and Friends,” one of Trump’s favorite TV shows, had highlighted the caravan on Twitter, possibly drawing the president’s attention.

“These big flows of people are all trying to take advantage of DACA. They want in on the act!” Trump said, referring to the Deferred Action for Childhood Arrivals (DACA).

Trump rescinded the Obama-era program, which protects immigrants who arrived in the country without documents as children, but it is currently tied up in the courts and the fate of the so-called “Dreamers” remains in a legal limbo.

His attempts to reach a compromise with Democrats on DACA — in return for funding for a Mexico border wall — have so far failed.

Trump suggested in another tweet that Republicans override Democratic opposition in Congress and push through tougher immigration laws, declaring, “NO MORE DACA DEAL.”

“Border Patrol Agents are not allowed to properly do their job at the Border because of ridiculous liberal (Democrat) laws like Catch & Release.

Since taking office, Trump has repeatedly tried to link immigration with crime but immigrant defenders say many are fleeing poverty and violence.

Trump expanded on what he meant in comments to reporters as he walked into church in Palm Beach, Florida with wife Melania for an Easter service.

“The Democrats blew it,” he said. “They had a great, great chance. But we’ll have to take a look. But Mexico has got to help us at the border. They flow right through Mexico. They send them into the United States. Can’t happen that way anymore.”

His administration is currently re-negotiating the terms of NAFTA, the 1994 trade accord with Canada and Mexico that Trump has previously threatened to scrap unless the US gets more favorable treatment.The next round of formal NAFTA talks are expected in April in Washington.

Trump has blown hot and cold over the prospects of a new NAFTA deal.Last month he temporarily exempted both Mexico and Canada from steep new US tariffs on imported steel and aluminium.