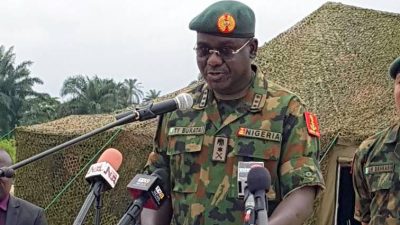 The Chief of Army Staff (COAS), Lt. Gen. Tukur Buratai, has issued a stern warning to all officers and soldiers in the Nigerian Army to steer clear of politics.

Buratai, represented by the Commander, Infantry Corps, Maj.-Gen. Lamidi Adeosun, gave the warning on Saturday at the graduation ceremony of officers who underwent a Regimentation and Leadership training of the 64 RC and SSC 44 course at the 20 Infantry Battalion Serti, Taraba.

“Leave politics to the politicians and concentrate on your chosen career” he noted.

He charged the graduating officers to use the knowledge and experience acquired during their training to help in tackling the current security challenges in the country.

The COAS said the relevance of the just concluded course in their career as commissioned officers cannot be overemphasised.

Buratai said ” it is pertinent to state that the recent gains of the Nigeria Army in the North-East and other internal security operations all over the country is expected to present the challenges of a growing rank of criminal elements and criminal activities”.

“Such challenges were characterised by kidnapping, assassination, sabotage, armed robbery and other act of terrorism, he noted while urging them to lead by example.

“I therefore urged you to keep alive the knowledge acquired so that you will give a good account of yourselves by adding value to the Nigeria Army in your respective capacities”.

Earlier, the Commanding Officer of the 20 Battalion Lt.- Col. Anwar Abdullahi, said that the 206 graduating students who had earlier finished from the Nigeria Defence Academy (NDA) were assembled in Oct 2017.

He said the objectives of the course was to enhance the proficiency of the officers on weapon handling, marksmanship and shooting skills .

Others include regimentation, customs, ethics and tradition of Nigeria Army and Junior Leadership training among others.