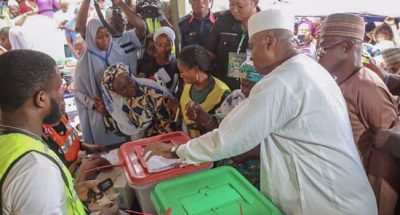 Senate President Abubakar Bukola Saraki has expressed satisfaction with what he described as the massive turnout of voters in Kwara State for the Presidential and National Assembly elections.

Senator Saraki who spoke with journalists shortly after he cast his vote at Ode Opobiyi polling unit 005/006, in Ajikobi Ward of Ilorin West Local Government Area, also commended the peaceful atmosphere witnessed during the exercise.

Accompanied by his wife and mother, as well as his eldest son, the Senate President cast his vote at exactly 10.20am.

He asked the electorate to maintain the peaceful atmosphere and remain patient to enable them to cast their vote within the stipulated time frame.

The Senate President, however, decried the late arrival of voting materials to some polling units within Ilorin metropolis and called on the Independent Electoral Commission to redress such anomaly in subsequent elections.

newsheadline247 - January 26, 2023
“Most of the banks don’t just have the newly designed currency as the available quantity for distribution is being warehoused on the instruction of...