The Guardian NG     Rochas Okorocha, governor of Imo State has been in the news recently for various reasons. After receiving a backlash from Nigerians for erecting statues of Liberian president, Ellen Johnson-Sirleaf and South African president, Jacob Zuma, who is currently facing corruption charges, Okorocha, has once more, become the focus of Nigerians.

His appointment of his biological Mrs Ogechi Ololo as Commissioner For Happiness and Couples Fulfilment in Imo State is deemed an aberration.

Ololo is among the newly sworn in 28 commissioners and 27 Transition Committee Chairmen for the 27 local councils in the state.

Before her appointment as commissioner, she served as the deputy chief of staff and later as special adviser on domestic matters in Okorocha administration.

The new commissioner has already opened a Twitter account and promptly explained that her responsibility is to reduce divorce by ensuring that couples in Imo state are fulfilled.

She further stated that her main objectives include:

reducing the divorce rate and bettering marriages in the state

catering to the welfare of the average Imo indigene.

But Nigerian Twitter thinks the appointment is one big joke. 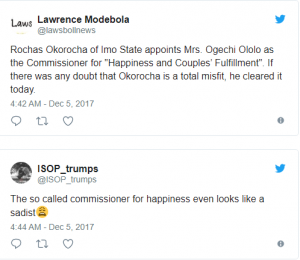 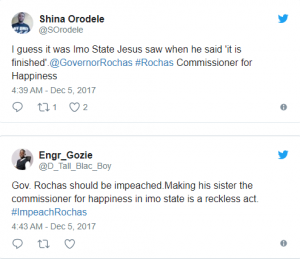 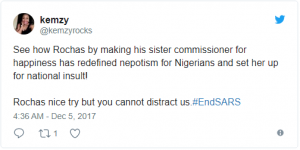 On the other hand, some are making jokes about it 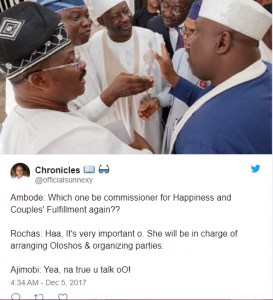