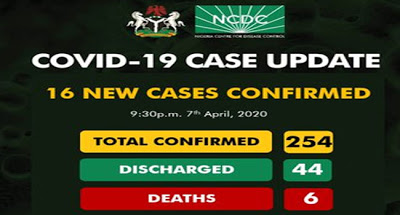 The Nigeria Centre for Disease Control (NCDC) has confirmed 16 new COVID-19 cases bringing the total number of infected patients in the country to 254.

Ten of the new cases were discovered in Lagos and two infections were confirmed in the Federal Capital Territory (FCT).

As of 9:30pm on April 7, the NCDC stressed that the country recorded a new death – total at six – while 44 people have been recovered from the disease and have since been discharged.