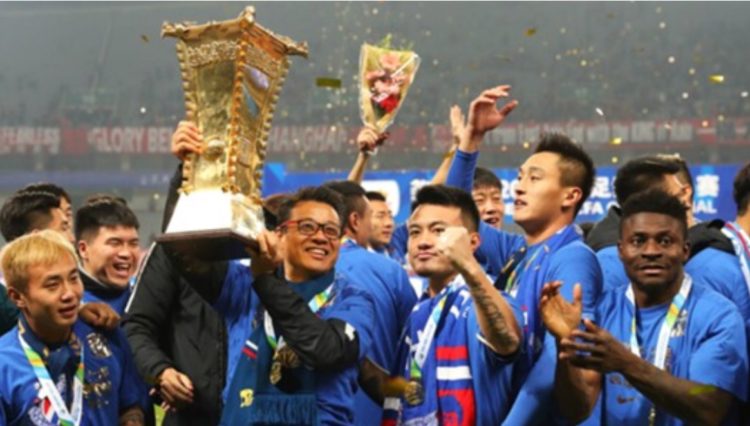 It was Shenhua’s first FA Cup triumph since 1998 and earns them a place in next season’s Asian Champions League.

They did it in thrilling fashion and without Argentine forward Carlos Tevez, whose disastrous 11-month spell in China looks to be over after he failed to appear in either leg of the final.

Shenhua went into the two-legged tie as underdogs against an expensively assembled SIPG side featuring the Brazilians Hulk and Oscar, Asia’s most pricey player at 60 million euros.

Portuguese coach Andre Villas-Boas, whose future in China is also unclear having failed to lead SIPG to silverware this season, paid the price for a lack of ambition in the 1-0 first-leg defeat at Shenhua a week earlier — Martins the scorer.

At least SIPG went out fighting, winning 3-2 on an enthralling night at Shanghai Stadium.

Hulk and international winger Wu Lei both tested out the away goal and on 15 minutes SIPG took the lead.

Oscar crossed and Lu Wenjun was on hand at the far post to steer the ball back across goal.

Both sides had half-chances and three minutes before the break a moment of controversy.

Shenhua, with former manager Gus Poyet watching from the stands, thought they had scored through Cao Yunding.

The away players wheeled away in celebration, failing to spot that the referee had blown up for an infringement by Martins.

The 33-year-old forward had given the side now coached by Wu Jingui a slender lead from the first leg, but he was adjudged to have impeded SIPG goalkeeper Yan Junling.

But on the stroke of half-time Shenhua did score and it was Cao again, swivelling inside the box to fire the ball past Yun for 1-1 on the night and 2-1 on aggregate.

Martins, once of Newcastle United and Inter Milan, looked to have won the tie when he cut in from the right and curled the ball beautifully into the top corner from well outside the box.

But Hulk buried a penalty four minutes later, then on 76 minutes SIPG took the lead on the night 3-2 when Shenhua captain Giovanni Moreno put the ball into his own net, setting up a frenetic finale during which SIPG’s Fu Huan was sent off.  NAN