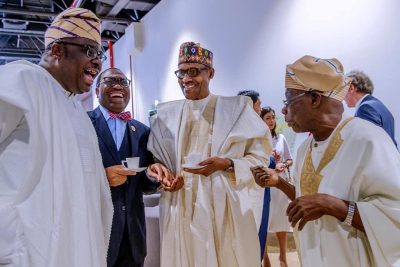 In spite of their political differences, the display of warmth as captured in photographs of President Muhammadu Buhari and former President Olusegun Obasanjo in Dakar seems to have confirmed the game of the statesmen as unifying forces.

Ordinarily, pundits expected the duo to be at each other’s throat, especially with the completion of the presidential election to which Obasanjo had joined forces to try to unseat president Buhari.

The warmth and boisterous exchange of pleasantries by Buhari and Obasanjo at the inauguration of President Sall of Senegal is a confirmation that politics is a game. No hard feelings.

The warmth exemplified by the photograph confirms that both leaders hold themselves in the highest esteem despite their differences.

Buhari had since put the acrimonious opposition behind him and sent a message of congratulations to the former military and civilian ruler, who clocked 82.

He described Obasanjo as “a passionate and great patriot who deserves accolades for his immeasurable contributions to our democracy and national unity.”

“Regardless of our political differences with Obasanjo, I still hold him in the highest esteem because his contributions to the development of the country overshadow those differences.”

“Chief Obasanjo gave a good account of himself and inspired his juniors with his wit and other leadership skills.”

“Nigeria’s successful transition to democratic rule in October 1979 was one of Obasanjo’s remarkable contributions to national development.”

“As he celebrates his 82nd Birthday, I wish Chief Obasanjo more good health, knowledge and wisdom in the service of Nigeria and humanity”, President Buhari said.

At an event to mark his birthday, Obasanjo said he would continue to criticise President Buhari.

According to him, governance is not a family affair, adding that democracy involves criticisms and consideration of all sides to an issue.

‘‘There is nothing personal between President Buhari and I.

‘‘In a democracy, you can criticise a policy, a government or a leader because democracy is not a family affair.

‘‘If it is my brother that is occupying the leadership role and he is not doing what I believe he should do, he must be criticised and that is what democracy is all about.

‘‘I have been in that position longer than any Nigerian will ever be there.

Obasanjo on Monday appealed for the support of people across party lines to help in building Nigeria and making the country greater.

Obasanjo also called for a strong voice and action from the opposition parties to save the nation’s democracy.

He made the call on Monday when members of the opposition Peoples Democratic Party (PDP) from the south-west visited him in Abeokuta.

“Nigeria needs a vibrant voice and opposition with a view to building a virile democracy,’’ he said.

He said he was willing to support genuine efforts from those who were passionate about the interest of the country.