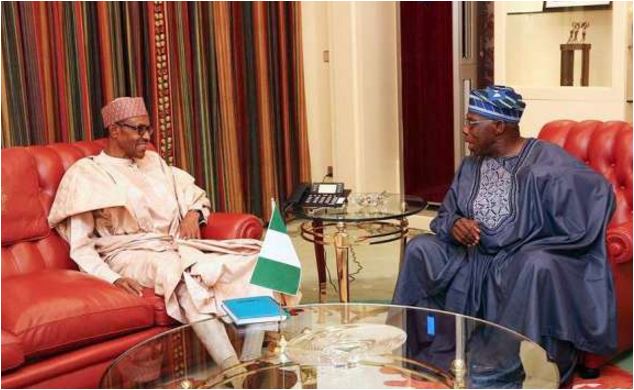 The Chairman of the Presidential Advisory Committee Against Corruption (PACAC), Itse Sagay, has described former President’s recent comment on the President,s performance in office as ‘inappropriate’ and ‘insulting’.

Mr. Obasanjo had in a statement released Tuesday urged the president not to seek re-election, saying he has performed below par since assuming office.

The former president lambasted Mr. Buhari, saying he should willingly decline calls for him to seek re-election from ‘sycophants’.

In his reaction, Mr. Sagay accused Mr. Obasanjo of hypocrisy, saying the former president pursued a third term when he was in power.

Speaking to The Nation newspaper, Mr. Sagay expressed surprise at the content of Mr. Obasanjo’s letter, adding that then former president should learn to ‘respect other people’.

“I saw Obasanjo’s comments and I could not believe my eyes, that a man who tried to get a third term is discouraging someone else from getting a second term. It doesn’t make sense,” he said.

“I think it is insulting for a man who wanted third term to tell somebody else not to want second term. It is most inappropriate, and for a former head of state to say so is most improper.”

Mr. Obasanjo had in 2013 written a similar letter to former President Goodluck Jonathan, and later dramatically supervised the destruction of his membership card of the Peoples Democratic Party, PDP.

On Tuesday, both the ruling APC and the presidency declined to comment on Mr. Obasanjo’s ‘special statement’ saying they were still studying its content.

Mr. Sagay’s comments are the closest to a response by the presidency to Mr. Obasanjo’s rebuke of President Buhari.

On Tuesday, hours after Mr. Obasanjo’s statement became public, Garba Shehu, Senior Special Assistant on Media and Publicity to Mr Buhari, declined comments when reached by Premium Times NG for reaction to the statement.
He said the presidency had no comment at the.

Earlier, the ruling APC also told Premium Times it could not comment on the statement.

“The situation is that APC does not have a response at this time,” said Bolaji Abdullahi, the spokesperson for the party. “Maybe if we are given the opportunity to study the letter more closely, we will have a response.”

Mr. Abdullahi said the party had only “relied on what is being circulated in the media.”

When told the former president accused the APC government of nepotism, corruption and incapacity to promote national integration security, Mr. Abdullahi replied: “I will not be able to react to any content of the statement until we have the opportunity to study it.”