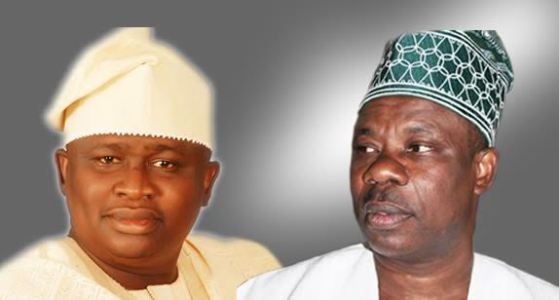 A front line 2019 governorship aspirant in Ogun State, Senator Solomon Adeola, on Thursday revealed that he has no grudges against Governor Ibikunle Amosun, The Nation NG has reported.

Adeola who is popularly called Yayi said what exists between him and Amosun are just differences in “political ideology and political belief,” explaining that what he found disagreeable about the Governor is his mindset that someone coming from Lagos should not govern Ogun State.

The Senator who hailed from Agosaga Pahayi in Ilaro, Yewa South Local Government Area of Ogun State, but currently representing Lagos West at the National Assembly, added that it was this Amosun’s attitude of “how can he come from Lagos to rule us” remained the source of contention between the duo.

According to The Nation NG, Adeola made the clarification while fielding questions during an interactive session with members of the Ogun West Consultative Forum at Ilaro, the Headquarters of Yewa South Local Government Area.

He recalled that each of the first civilian Governor of Ogun State, Bisi Onabanjo, Chief Olusegun Osoba, Otunba Gbenga Daniel and Amosun himself had all worked or done business in Lagos for years before returning home to vie for and won the position of a Governor in Ogun State.

The Senator wondered why a strange and different yardstick should now be introduced into the political field of the state by the incumbent Governor because the Ogun West people have become more determined to produce a Governor in 2019?

Adeola noted that he “wants to be Governor of Ogun State but not desperate” about it, stressing, however, that he remained unflinching in his resolve to pursue the ambition to a successful end.

He also noted that there were many rumours flying about to the effect that he was stalling the efforts of the Governor to obtain the $350m loan facility which requires clearance by the Senate, and said there was no truth to it.

Adeola said he would not stand in the way of what would bring development or progress to the state, adding that the loan facility even came up on the floor of the Senate on Wednesday.

He explained that nobody was working to frustrate the Governor from seeking the $350m facility, saying he recognises the rights of states to source for a financial package but it shouldn’t be a routine thing.

He said he would resuscitate the Ogun State Road Maintenance Agency(OGROMA) to address the constant road problems in the state, revisit the abandoned Olokola Liquefied Natural Gas(OKLNG) located in Ode – Omi in Ogun Waterside, leverage on the proximity of Ogun to Lagos to boost the socio-economic fortunes of the state. The Nation NG