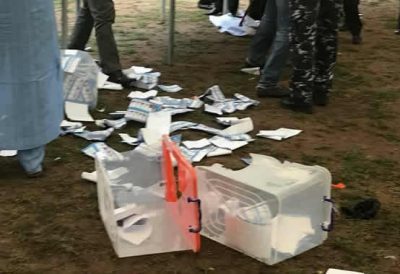 A Police officer identified as Inspector Peter was reportedly shot on Sunday morning when some suspected political hoodlums attacked officials of the Independent National Electoral Commission (INEC) at a collation centre in Yewa-North Local Government Area of Ogun State.

Reports stated the incident, which occurred around 10a.m on Sunday, also left others wounded during the attack

Newsheadline247 understands that the policeman was among the security personnel drafted to guard the INEC’s collation centre at Ketu College in Igan-Alade area of Eggua Ward in Yewa-North LGA.

According to a report monitored on the Punch NG, the thugs had laid an ambush at the college, awaiting the arrival of the INEC officials who were in possession of the results and other materials.

The materials in the possession of the INEC officials reportedly included the already thumb-printed ballot papers for the governorship and state House of Assembly elections held in the area.

But as the INEC officials started announcing the results, the hoodlums, who were fully armed with guns, cutlasses and other dangerous weapons, allegedly swooped on them from their hideout.

The hoodlums were said to have started shooting directly at the INEC officials, some party agents and the security men present.

Inspector Peter was hit by the bullets fired by the hoodlums and he fell down.

The hoodlums were, however, chased by men of the Nigerian Army who also retrieved the ballot boxes and materials snatched.

The Ogun State Police command through its Police Public Relations Officer, Abimbola Oyeyemi, had, however confirmed the incident to newsmen in Abeokuta but declined comments on the number of arrests made so far in connection with the attack.