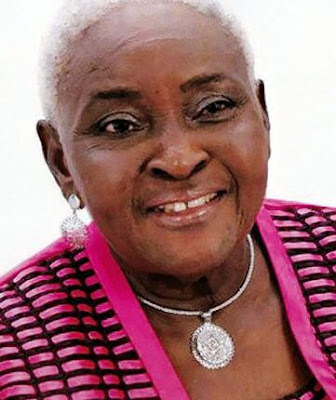 Patrick And I Are Officially Divorced-Ireti Doyle

The deceased, who was the mother of Ogun PDP guber candidate, Hon. Oladipupo Adebutu, we learnt early hours of today aged 80.

She attended Methodist Girls High School, Yaba from 1952-57 and started work at the Board of Customs and Excise in Lagos briefly before proceeding on vocational training at the Federal Training Centre, Broad Street, Lagos.

After completing this programme, she returned to customs again and worked for a little while until January I963 when she travelled to the UK to study at Pitman College for a one-year programme in Secretarial Administration.

On her return to the Nigerian shores, she was posted to the Ministry of Health from where she was seconded to the Board of Customs in 1967. She eventually left the service in 1971 at the request of her husband who wanted her to be a full-time housewife.

Of that decision, she said, “I didn’t like the idea that time, but I had no option. My husband had been wonderful since then, tending to family needs while I was bringing up the children. Our marriage, from my own side, was blessed with children. The eldest is Honourable Oladipupo Adebutu, while the youngest is Olusegun Adebutu, who is an (Economist).