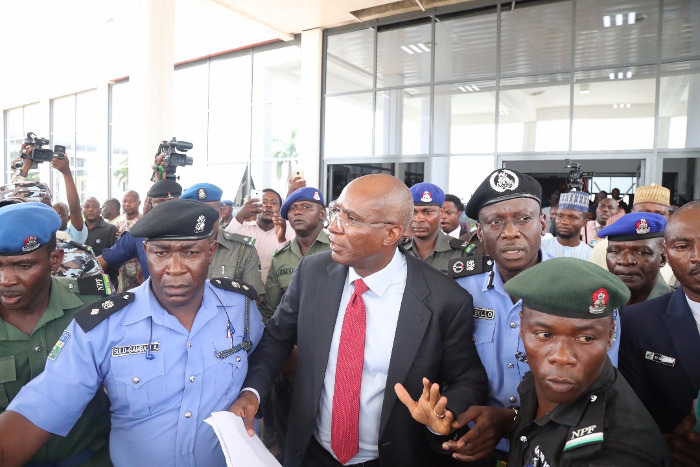 The Federal High Court, Abuja on Friday fixed April 30 to hear a suit filed by Sen. Ovie Omo-Agege against the Senate, the Senate President and Attorney-General of the Federation.

Omo-Agege, who represents Delta Central Senatorial district, filed the suit to challenge his suspension from the Senate.

The judge, Justice Nnamdi Dimgba fixed the date after refusing to vacate an earlier order he made granting an accelerated hearing of the matter.

The Counsel to Omo-Agege, Mr Alex Izinyon, (SAN) had approached the court with an ex parte motion seeking an injunction against the Senate, but the court declined.

The court then asked Izinyon to put the respondents on notice.

Justice Dimgba ordered that the Senate and Senate president to show cause why the reliefs sought by the senator should not be granted.

The court gave the respondents seven days to show cause, ordered an accelerated hearing of the matter and adjourned to April 27, for definite hearing.

However, when the matter was called, Izinyon informed the court that he was ready to move his motion saying that the matter was slated for hearing of the substantive case.

Izinyon also told the court that the respondents had been duly served with the originating summon.

But Mr Mahmud Magaji, (SAN), counsel to the Senate and Senate president, raised an objection, saying that he had filed a memorandum of conditional appearance.

Magaji said he filed an application, seeking the court to set aside its order which granted abridgement of time to hear the matter.

The counsel maintained that he was just briefed of the matter on April 19, and that he had not sighted any of the originating processes.

The judge, however, said that the court had proof that the Senate and the Senate president had been served through clerk of the Senate.

“I have to protect the integrity of the court. On two occasions, this court has respected the Senate and as well, I expect the Senate to respect the court,” Dimgba said.

He directed the respondents to serve advance copies of their counter affidavits and other processes on the plaintiffs through email, not later than 7 p.m, April 27.

The judge adjourned the matter until April 30 for hearing of the substantive suit.

Omo-Agege is asking the court to among other reliefs; grant an order restraining the defendants, their servants, agents, privies or officers from interfering with his rights and privileges as a Senator.

“An order of perpetual injunction, restraining the defendants, their servants, agents, privies or officers from interfering with the plaintiff’s rights and or privileges, as a Senator.

The reliefs also including ‘’preventing him from entering or remaining within the precinct or chamber of the Senate or National Assembly”, among others.

newsheadline247 - January 31, 2023
A total of 29 Nigerian referees will on Wednesday, February 1, 2023 receive their badges to operate as FIFA match officials for the year...
Business

newsheadline247 - January 31, 2023
Global tech giant Google on Tuesday launched a programme that would provide resources and opportunities for women founders in Africa. The programme is tagged “First...
National

newsheadline247 - January 31, 2023
The Economic and Financial Crimes Commission, EFCC, is on the trail of more sellers of naira notes after separate operations in Abuja. The agency arrested...