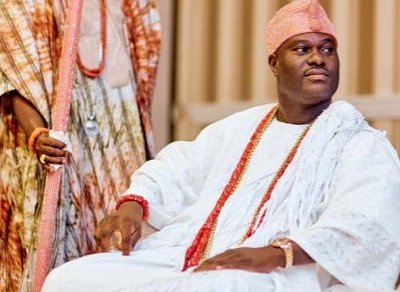 All is set as emerging details suggest his imperial majesty, Ooni of Ife, Oba Adeyeye Ogunwusi is about to take another wife as the new queen of the palace.

And the queen to be has been identified as a younger sister of a money bag property merchant.

A source stated the lucky bride “is a younger sister to a real estate chief.”

The property merchant with name carefully kept under wraps is said to be hell-bent on making the union between his sister and the Ooni happen.

Further revelation has it that the bride is from Ogun state.

And report stated the brother is with a huge ambition of becoming an in-law to the Ooni with another desire of grabbing a chieftaincy title and thereafter stage a lavish installation celebration.

As reported by societynow.ng, the arrangement for the upcoming marriage has reached such a stage that members of both sides – the Ooni and the property merchant’s – informally address one another as “my in-law”.

The upcoming wedding would make it the third time Ooni would be trying his hands on marriage.

Recall that Oba Adeyeye Ogunwusi who is also a big player in the real estate and property trades had suffered collapsed marriages. The first, a marital union he contracted as a prince and the second he perfected after ascending the throne.

Share
Facebook
Twitter
Pinterest
WhatsApp
Linkedin
Tumblr
Telegram
Previous articleBishop Kukah fears 2019 elections may be difficult for Nigeria, says it will pull through only by miracle
Next articleOtunba Gbenga Daniel, A Rare Nigerian With Much Love For His Fatherland By Steve Oliyide