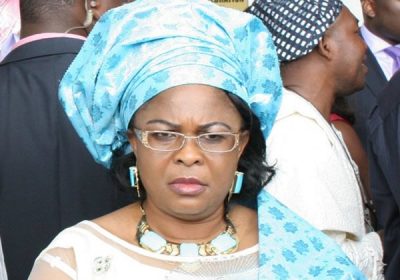 Accuses EFCC of trying to frustrate her rights enforcement suit

The wife of former President Goodluck Jonathan, Mrs. Patience Jonathan, on Thursday temporarily blocked the Federal High Court in Abuja from hearing an ex parte application filed by the Economic and Financial Crimes Commission seeking an order of interim forfeiture of two properties traced to her in Abuja.

Usually, such ex parte applications are heard by courts without the knowledge or participation of the other parties whose properties are at stake.

But somehow, Patience’s legal team led by Chief Ifedayo Adedipe (SAN) got wind of the fact that the EFCC’s ex parte motion was to be heard by Justice Nnamdi Dimgba on Thursday.

The legal team quickly filed a motion challenging the court’s jurisdiction to hear the ex parte motion and also attended court on Thursday to block the hearing.

Justice Dimgba was set to hear the EFCC’s motion on Thursday but had to adjourn until November 11 after Adedipe and Chief Mike Ozekhome (SAN), appearing for Mrs. Jonathan, argued that the ex parte could not be heard since their client had filed an application challenging the court’s jurisdiction to entertain it.

The EFCC was represented by Best Ojukwu and ‎also later by Tahir Sylvanus.

After the back-and-forth arguments between the EFCC’s and Mrs. Jonathan’s legal team, the court fixed November 11 for the hearing of the applications. Punch