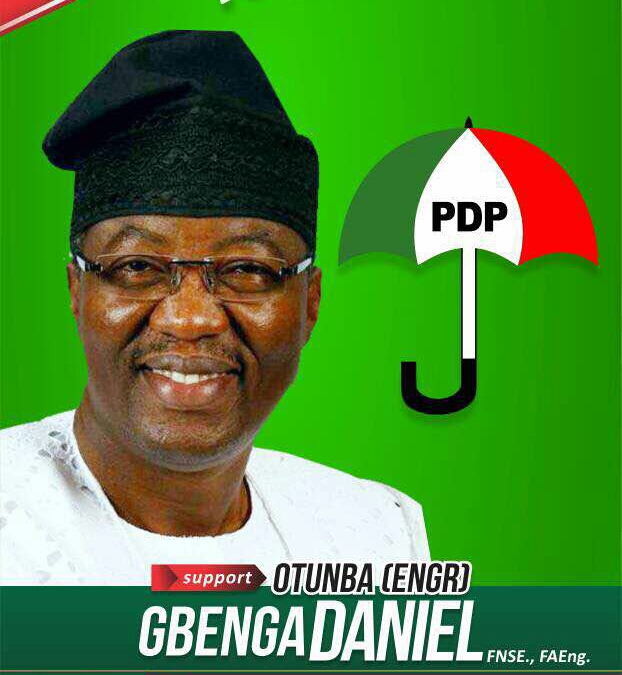 Former Governor Gbenga Daniel on Friday visited ex-President Olusegun Obasanjo at his Presidential Hilltop Estate, Abeokuta, Ogun state, to consult and solicit support ahead of his planned declaration of intention to run for the Office of the National Chairman of the People’s Democratic Party (PDP).

Daniel, who governed Ogun State for eight years on the platform of PDP, is expected to formally declare his intention for the PDP chairmanship position in Abuja next Wednesday.

The ex – Governor who had since reconciled with Obasanjo after the duo fell apart in the build up to the 2011 governorship election in the state, noted that given the status of Obasanjo as a foundation member of PDP, it was necessary that he seeks his input before proceeding with the ambition to lead the party at the National level.

Other PDP bigwigs spoiling to also lead the once touted as the largest political party in Africa, are chief Bode George and the Chairman of Daar Communications, Chief Raymond Dokpesi.

Daniel  and his entourage comprising  members of the Ogun State Caretaker Committee of the party, former State Chairman of PDP, Elder Joju Fadairo, former House of Representatives member, Hon. Kayode Amusan, former minister, Alh. Sarafa Ishola and Director of Mobilization and Organization, Ogun PDP, Deji Kalejaiye among others, who arrived Obasanjo’s home around 10am, entered a closed door meeting with him after about an hour long – waiting.

Others in the entourage are Chief (Mrs) Iyabo Apampa and  former Deputy Governor in the state, Alhaja  Salimot Badru.

And when they emerged later, Daniel told journalists that he came to “consult with Baba Obasanjo and seeks his advice” regarding his ambition to run for the office of the National Chairman of PDP, adding that he can’t make any  move in that direction without the ex – President’s input.

“I’m contesting for the PDP chairmanship position. I’m consulting and Baba is one of the foundation members of the party and we can’t move without him,” Daniel said.

He said PDP is now united and being rejuvenated to make it a party to beat both in Ogun State and at the centre.

“We have been united. You can see all of us are here. We have realised that united we stand and divided we fall. There are no many problems or many challenges. What you see is just called internal democracy.

“And to summarize it, we just want to return the party to the people and once that is done, I think the people will be in control, he added.

Also, the Caretaker Committee Chairman of PDP for the state, Mr. Tunde Odunye, told journalists aside seeking Obasanjo’s support, they also confessed their “transgressions” to him and got his “forgiveness” as a father would forgive erring children.

However, it should be recalled that Obasanjo had in the build up to the 2015 general elections, publicly tore his PDP membership card before Television Camera and announced his quitting of partisan politics to become an elder statesman and father of all of Nigerians.