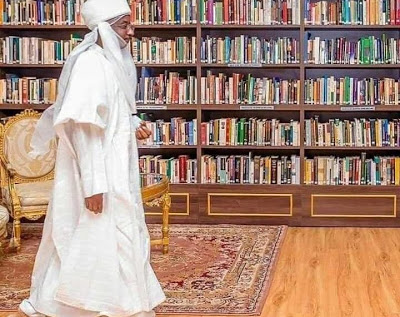 The library belonging to Muhammadu Sanusi II has been moved out of the palace following his dethronement as emir of Kano.

Abba who also revealed that the library worth over N200 million said deposed emir was worried about the library which has over 40,000 books and catalogues.

“His highness’ greatest concern was the fate of his books, so my sister and I stayed behind to ensure that we evacuated all the books,” Abba said.

“It took us sleepless nights to accomplish the task in two days. I made most of the transactions for the purchase of the books, and I can tell you, in conservative estimate, they’re worth over N200m.”

Sanusi, a former governor of the Central Bank of Nigeria (CBN), is an economist many consider as an influential intellectual from the north.

Abba, who also recently resigned as Falakin Kano, added that among Sanusi’s “over 40 beautiful horses and over 100 choice saddles, he picked one each and left the remaining to his successor”.

Sanusi was dethroned as emir on Monday by Governor Abdullahi Ganduje led Government of Kano State.