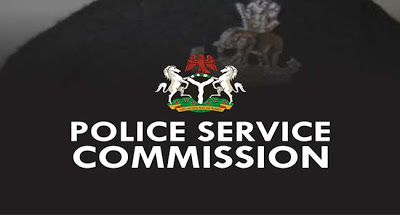 …promotion in the police was guided by defined rules and regulations

The Police Service Commission has denied flowing tales of marginalisation in the police promotion.

The commission in brief claimed that no part of Nigeria was marginalised in promoting officers of the Nigeria Police Force (NPF).

Ikechukwu Ani, the Head of Press and Public Relations of the commission, explained this in a statement.

Ani said promotion in the police was guided by defined rules and regulations that had nothing to do with ethnic or religious considerations.

He said the commission had sanitised recruitment, promotion, and discipline in the force and ensured that established rules and regulations govern the process.

It is on record that the commission contributed to ensuring sanity in the recruitment of qualified Nigerians into the police where the principle of federal character is considered alongside merit, according to Ani.

“The commission is a product of the 1999 Constitution as amended and further consolidated by the Police Service Commission (Establishment) Act, 2001.

“It met, at inception in 2001, a recruitment process that needed to be made more transparent and inclusive through respect for the federal character principles,” he said.

A report by Peoples Gazette in December revealed President Muhammadu Buhari’s plot to deprive a southern police officer Moses Jitoboh of assuming the inspector-general position, which he had reserved for northerners since 2015.

The report by the online news platform cited plots by the president to appoint Dasuki Galadanchi from Kano instead.

Mr. Galadanchi was suddenly promoted as an AIG in January to make him a qualified candidate to rival Mr. Jitoboh, who is from Bayelsa.

Although only Messrs, Jitoboh and Galandachi meet the legal requirement of having four years left in service and being of AIG’s rank, some other police chiefs were rumoured to be in contention too.

A police source reportedly informed that AIGs Umar Garba, Ali Janga, Habu Sani and Zaki Ahmed were in the race.

Dan-Mallam Mohammed was the only DIG said to be in the race, although both he and the four other AIGs have less than four years to retirement, which is a ground for disqualification under the amended police law.

NEWS: Why billionaire Leemon Ikpea’s wife is hell-bent on destroying him after she was sent packing: Report

Share
Facebook
Twitter
Pinterest
WhatsApp
Linkedin
Tumblr
Telegram
Previous articleWhy billionaire Leemon Ikpea’s wife is hell-bent on destroying him after she was sent packing: Report
Next articleI hope this victory put an end to campaign of calumny against me – Saraki speaks on Court verdict