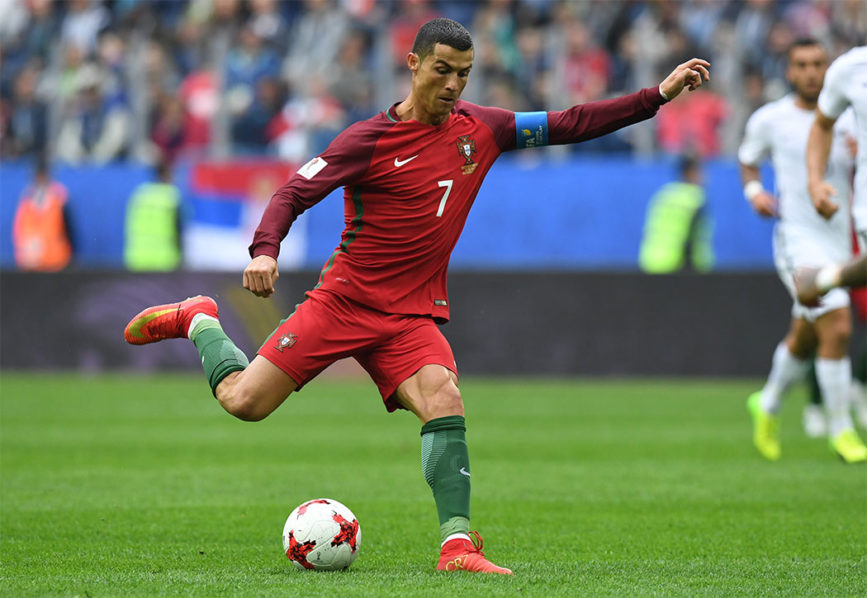 Copa America champions Chile will try to curb Portugal superstar Cristiano Ronaldo in Wednesday’s Confederations Cup semi-final with the goal-ace in rich form despite a tax storm brewing in Spain.

The 32-year-old converted a penalty in Saturday’s 4-0 thrashing of New Zealand to claim his 75th international goal.

The Real Madrid forward has now scored 16 times in his last 10 games for club and country.

The Portugal captain will face tax evasion charges in a Madrid court next month, but has dazzled on the pitch in Russia, claiming man-of-the-match awards in all three group games, netting two goals and providing an assist.

After helping steer Portugal to the Euro 2016 title in Paris a year ago, Ronaldo is aiming to win a second international title when the Confederations Cup final concludes on Sunday in Saint Petersburg.

Mexico or Germany, who meet in the other semi-final, will face the winners of Wednesday’s clash in Kazan.

Ronaldo is closing in on the legendary Ferenc Puskas’ European record of 84 international goals, despite the off-field turmoil and constant speculation about his future — he has reportedly threatened to quit Real.

“We all know he’s an amazing player, he’s very dangerous and can decide a game alone,” said Chile midfielder Marcelo Diaz, who has come up against Ronaldo with his Spanish club Celta Vigo, in Tuesday’s press conference.

“He has had an amazing season in Spain, he’s playing here with the same strength, which is why Portugal are in the semi-final.

“The main thing is trying to stop him getting the ball and scoring.”

Chile, who won the Copa America in both 2015 and 2016, will present Portugal with their toughest test so far in Russia, although the South Americans have yet to beat Portugal in three attempts with two defeats and a draw.

Fatigue could well be an issue in Portugal’s ranks. Head coach Fernando Santos opted to rest none of his forward line against the Kiwis and it has been a long season for the likes of Ronaldo, Joao Moutinho, Andre Gomes and Bernardo Silva.

“We still have 24 hours to decide if he plays or not, he has reacted well to his injury and we’ll take the decision tomorrow,” said Santos when asked about the former Monaco winger.

Left-back Raphael Guerreiro is struggling with a badly bruised foot and will not feature.

With defender Pepe suspended, either Jose Fonte or Luis Neto will partner Bruno Alves at centre-back as Santos expects a tricky tie against Chile.

“They have a good team, they’re aggressive with a fighting, combative spirit, but we are also warriors, we have a great capability to suffer and we don’t fear anyone,” said Santos.

“They are a very dynamic team with a lot of movement and are not an easy team to analyse.

“Their strengths are many, but like any team they have weaknesses. We will look to exploit those tomorrow.”

Chile coach Juan Antonio Pizzi has all 23 players fit after midfielder Charles Aranguiz recovered from a knock in Sunday’s 1-1 draw against Australia.

Despite doubts about Alexis Sanchez’s Arsenal future, the Chile camp says their star striker is in high spirits.

They hope his good performances will showcase his skills to potential future employers.

With a year left on his Gunners’ contract, Sanchez is stalling on signing an extension amid rumours of a switch to German giants Bayern Munich.

“He’s giving his best here and I think most players would like to be in a similar situation, because the best squads in the world want to have him, even if he is already at a good club,” said Pizzi.

“He’s a responsible person, he knows what he has to do and he’s fully focused on Chile.”