In what depicts a revelation of quiescent members of the Federal House of Representatives, Daily Trust revealed the numbers of members of the lower chamber of the National Assembly who have ‘pocketed’ at least N32 billion in two years without sponsoring a single bill.

The revelation shows at least 161 members of the House of Representatives are yet to sponsor a bill more than two years after assuming office. One of the dormant 161 lawmakers is Hon.Jimoh Ojugbele, representing Ado-odo/ Ota Federal Constituency in Ogun State.

Newsheadline247 gathered Jimoh Ojugbele who is in the House of Reps for the second time after securing the same status with Peopls Democratic Party (PDP) platform in 2003 has been receiving hard knocks from the people of his constituency after the revelation of the dormant members of the Federal House of Representatives by one of Nigeria’s popular news media, Daily Trust. 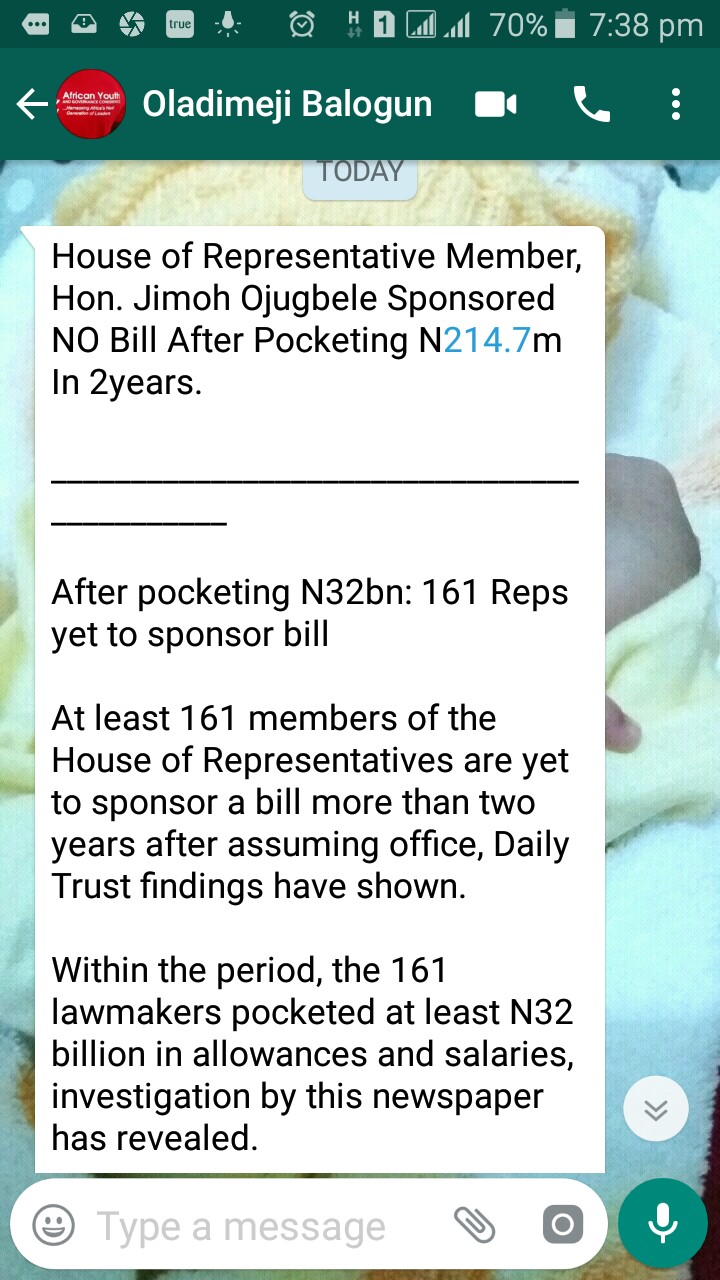 The post instantly went viral and was consequently feasted upon by the people of Ado-Odo/Ota Federal Constituency.

It was also learnt that the Igbesa born politician has never contributed to any proceeding or debates in the house.

“That was exactly what he did in his first time at the house between 2003 and 2007 when he represented us. He was always sleeping in the chamber while others were busy with proceedings so I am not surprised he has not sponsored any bill this term,” a source informed.

Further digs revealed Hon Jimoh Ojugbele who is planning to vie for the Ogun West Senatorial ticket come 2019 was devastated and humiliated after being informed of the post.

“His constituency aides have been calling those they could reach to pull down some of the posts because they believe it will jeopardize his senatorial ambition.

“Our Rep has not been accessible since we voted for him to represent us at the National Assembly, and besides, he doesn’t come home regularly to feel the plights of his people and we heard this same man is planning to seek for our votes for his senatorial ambition which I don’t think is possible,” the source told our reporter.

However, it was also gathered that the disturbed lawmaker had reached out to the personality behind the post, Oladimeji Balogun. According to the latter’s facebook post, Jimoh Ojugbele has contacted him and they have both spoken “at length”.

“I appreciate MHR, Hon. Jimoh Ojugbele, representing Ado Odo/Ota Federal Constituency, for his prompt response to my ‘noise’ over his performance below expectations.  He called and we spoke at length. He has promised to have a meeting with us when he is back in town, so that we can properly table our matter. You are appreciated, sir! Good governance through quality representation that is the ONLY thing I requested for.  #OtaMustBeGreatAgain 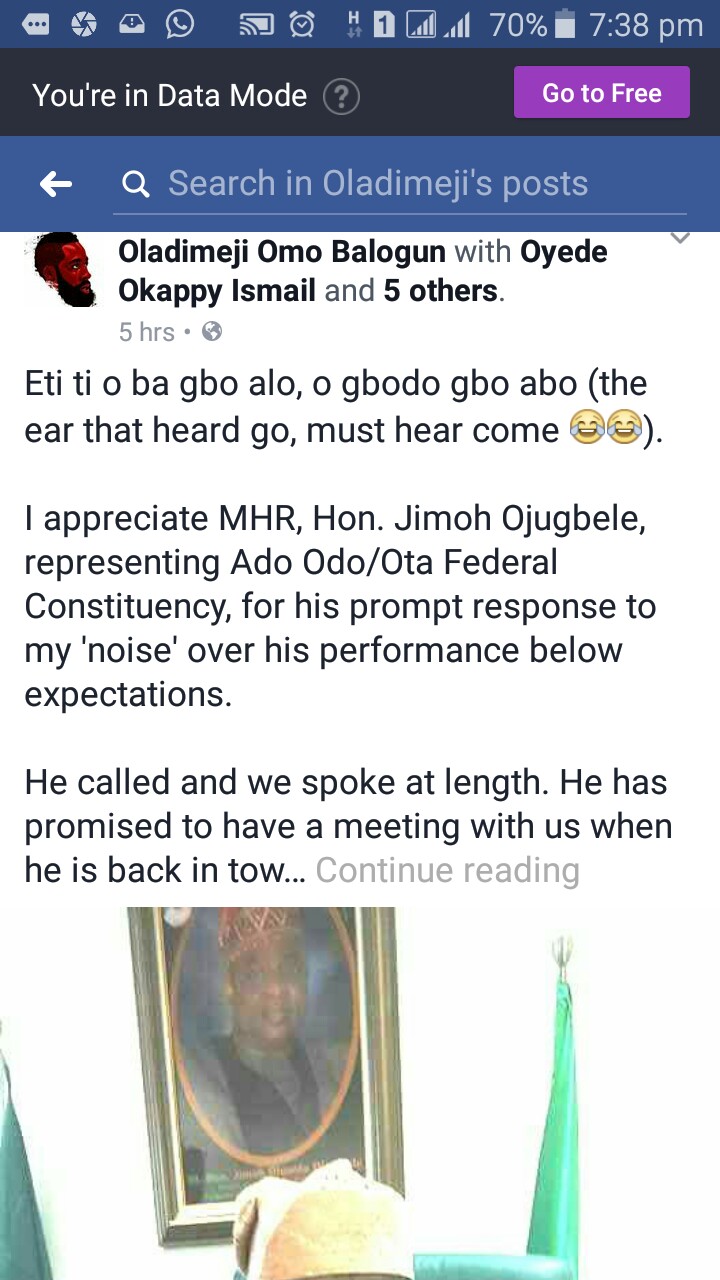 Oladimeji Balogun is known to be an Ogun State youth advocate, activist and political strategist. His post which has put Hon. Jimoh Ojugbele’s political camp fidgeting is below as posted;

They have spent 26 months out of their 4-year tenure, with only 22 months left.

Within the period, the 161 lawmakers pocketed at least N32 billion in allowances and salaries, investigation by this newspaper has revealed.

Each lawmaker gets N7.6 million as running/overhead cost and additional N660, 000 as salary monthly, which amounts to N8.26m monthly.

There are 1066 before the House, with 53 of them coming from the Executive arm, and 23 forwarded from the Senate.

Official records of lawmakers without bills obtained by Daily Trust showed that the North West has the highest where 60 of its 91 members have not turned in any bill. Of the 72 members from the South West, 32 have no bills to their names.

The North East has 48 members, 25 members of whom have no bills, while out of the 55 lawmakers from the South South, 19 failed to sponsor a bill.

Similarly, the North Central, with a total of 49 members, 16 members fail to sponsor a bill, while only 8 members out of 43 from the South East do not have a bill in their name. Only one member out of the two from the Federal Capital Territory (FCT) sponsored bills.

The breakdown showed that Chief Whip, Alhassan Ado Doguwa from Kano State, who is the leader of the North West Caucus in the House, has no bill in his name. Others from Kano are Ibrahim Sani Umar, Abdullahi Mohammed Gaya, Garba Umar Durbunde, Nasiru Baballe Ila, Suleiman Aliyu Romo, Sani Mohammed Rano, Munir Babba Dan-Agundi, Nasiru Ali Ahmed, Shehu Usman Aliyu, Musa Ado Tsamiya, Mustapha Bala Dawaki and Badamasi Ayuba. Only 11 members out of 24 have bills from the state.

The lawmakers without a bill from Sokoto State are Hassan Bala Abubakar, Aminu Sani Isa, Kabiru Marafa Achida, Bashir Isa Salihu, Mohammed Sa’adu and Shehu Aliyu. There are 11 members from the state.

There are six lawmakers from Kebbi State out of 8 without bill. They are Aliyu Danladi, Bello Dantani, Suleiman Hussaini Kangiwa, Abdullahi Hassan Suru, Salisu Garba Koko and Mohammed Dantani.

In the South West, Lagos has the highest members without bill, 10 of them out of 24. They are Joseph Adebayo, Diya Babafemi, Olufemi Adebanjo, Taofeek Abiodun, Abiola Olatunji, Bolaji Ayinla, Raji Olawale, Tajudeen Obasa, Abayomi Danda Kako and Nurudeen Akinwumi, a new comer who replaced late Adewale Elijah who had a bill before his demise.

Five out of the nine members from Ogun State have no bills. They are Akinlade Adekunle, Adekoya Adesegun, Ojugbele Olusola, Mukaila Kazzim and Williams Olusegun. There are three out of six lawmakers from Ekiti State, namely Akinyele Awodumila, Thedeous Akinola and Agboola Emmanuel Kehinde, without a bill.

Osun has two out of 10 without a bill. They are Akintayo Gafaru Amere and Albert Abiodun Adeogun.

In Gombe State, two members out of six have no bills. They are Ismaila Hassan and Yaya Bauchi, both of whom replaced Barambu Kawuwa and Khamis Mailantarki respectively. Also, two lawmakers out of eight from Adamawa State have bill, namely: Gutuwa Philip and Talatu Yohana, who replaced Laori Bitrus last year.

In the South South, nine members out of 13 from Rivers State have no bill. They are Dagomie Abiante, Gogo Bright Tamuno, Blessing Ibiba, Randolph Brown, Boma Goodhead, Jerome Amadi, Barry Mpigi, Chidi Wihoka and Maurice Pronen. Our correspondent reports that most of the Rivers lawmakers did not spend much time in the House as their elections were nullified. They only returned recently, while Mpigi, Wihoka and Pronen are new in the House.

Of the 10 members from Akwa Ibom State, four do not have a bill. They are Owoidighe Ekpoatai, Iboro Ekanem, Emmanuel Ukoete and Michael Enyong.

Bayelsa, Cross River and Delta have one member each without bills and they are Jephthah Foingha, Christopher Ngoro and Julius Pondi respectively.

In the North Central, six members out of 10 from Niger State have no bill. They are Abubakar Lado, Abubakar Chika Adamu, Muhammad Bala Faruk, Umar Rofia, Abdullahi Garba and Salisu Shadafi.

All the eight members from Plateau State have sponsored at least a bill.

In the South East, of the 11 members from Anambra State, four, namely: Okechukwu Eze, Anayo Nnebe, Chris Azubogu and Anohu Chukwuemeka have no bills. Three members out of the six from Ebonyi have no bills. They are Anayo Edwin, Nwazunku Chukwuma and Ogbee Lazarus.

Only Nkole Ndukwe out of the eight members from Abia State has no bill, all the members from Imo (10) and Enugu (8) have sponsored different bills.

Similarly, Zakari Angulu from the FCT has no bill to his name.

Mohammed Tahir Monguno from Borno State (North East) has nine. Speaker Yakubu Dogara has 10 while his deputy Yussuf Suleiman Lasun has one.

The Executive Director of the Civil Society Legislative Advocacy Centre (CISLAC), Auwal Musa Rafsanjani, told Daily Trust that the lawmakers’ inability to sponsor bills was because they lack capacity.

“It’s unfortunate that they spent two years collecting tax payers’ money. They should be accountable for all they have collected. Part of the reason for their being inactive is because they didn’t prepare for the job, so they lack the capacity. They don’t also understand the legislative work and they’re not ready to learn.

“They’re just in the legislature for their personal interest and not to make laws. But let’s even look at the ones that sponsored bills. Some of them don’t even know how to go about sponsoring a bill. Look at the bills to undermine CSOs, encourage looting, grant immunity to themselves, whittle down the powers of CCT and EFCC and the rest.

“Nigerians must confront the lawmakers to do the work they were elected to do. Those that are doing nothing must wake up from their slumber,” he said.