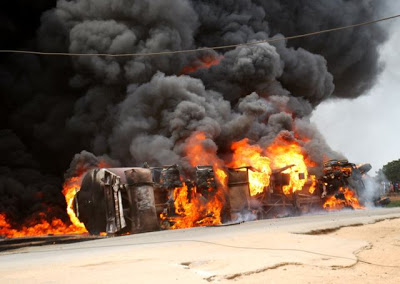 Two vehicles were reportedly gutted by fire on Friday during security checks by security personnel of the joint border patrol along.

The fire incident, according to reports, occurred when agents of the security patrol preventing drivers from smuggling fuel to Benin Republic engaged in frisking suspected smugglers’ vehicles.

The Federal Road Safety Corps (FRSC) confirmed that the vehicles went up in flames about 1630hrs and lasted for several hours, as both vehicles burnt to ashes.

The Route Commander, Florence Okpe said, “There was no loss of lives but the unfortunate incident was suspected to have been caused by the vehicle, whose petrol tank was filled to the brim but leaked part of the highly inflammable contents.”

According to a statement, Okpe said: “While on motion, there was a spark from the other truck close to the car with overfilled petroleum leaking tank with resulting spark that got the two vehicles burnt.

“Incidents of conveying petroleum products in cars, including rickety vehicles filled to the brim with petrol products is prevalent, following the recent directive by the Federal Government to restrict the supply of petroleum products within 20km radius to all border towns of Nigeria.

“Thus these categories of vehicles shuttle from Owode town, a nearby town to Idiroko in Ogun State to get fuel with their cars to supply to others in Idiroko Border Town”

“The FRSC Command in Idiroko has begun a public enlightenment campaign to educate motorists on the dangers inherent in the unwholesome practice.”